“I want a hamburger… no, a cheeseburger. I want a hot dog. I want a milkshake…”

“I too need structure.  A little fucking discipline.”

Who’d have ever thought I’d be writing consecutive posts about the off-season, roster moves of the Houston Rockets.  But here goes.

Too often, many of us find ourselves in work environments where the inmates run the asylum, with no sense of control and complete disregard for the chain of command.  Nowhere is this more evident than in today’s NBA. 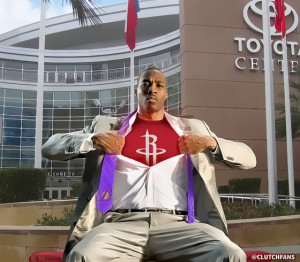 Superstar basketball players, who make more than their coach and quite often more than the team owners they play for, can now dictate where and with whom they want to play.  On a whim, one player can shift the Association’s entire balance of power.

The Dwight Howard signing did just that, immediately making a contender out of Houston and leaving Los Angeles to scour the free agent market for a big man to fill his shoes.

Upon hearing the news that the Rockets had just landed the most coveted free agent of the off-season, the disgruntled Omer Asik, who plays the same position as Howard, demanded a trade.   His demands were summarily dismissed.

The Turkish Asik has been in the league three years now, having his most productive season last season, averaging 10.1 points and 11.7 rebounds per game.  His contract with the Rockets will garner him $16 million over the next two years, a fair price for a solid starting center but a bit much for a backup.

As far as we know, the Rockets have no plans to move him which means he’ll either play alongside Dwight Howard (we saw how well Dwight coexists on the floor in L.A. with another big man) or alternate their minutes, probably a little bit of both.  Houston will have to figure that out.

But that’s not the point.  The point is who does Omer Asik think he is to demand a trade?  Dwight Howard?  Despite Asik’s solid numbers and very possibly more refined post moves than Dwight (who in the league doesn’t?), he has nowhere near the bargaining power of a Dwight Howard.  So of course management is going to tell him to shut the hell up, as they should.  It sets a good precedent for the later squabbles that are bound to happen.  After all, they did just sign Dwight Howard.

Now I’m not sure how the whole rejection thing went down, whether Asik stormed in to see General Manager Daryl Morey, whose cigar embers are still burning since signing Dwight Howard, and then asked to be traded through the help of his Turkish interpreter, or whether he went to the media pouting about potential playing time but that point is also moot.  The Rockets answer to Asik was a swift and decisive NO, as it should have been.

Asik broke the chain of command with little ground to stand on.  Know your place, young man.  Asik may make more money than McHale but it’s still McHale’s Navy.  As is true with any company, you don’t always have to like who you work with but you have to be productive and focus on a common goal, in this case winning an NBA championship.  McHale and MIT graduate Morey probably have a better idea than Asik what that will take.  At least that’s what they’re getting paid for.

Dealing with prima donna seven footers (or thereabouts) is no easy task.  Just ask anyone who has coddled to Dwight Howard over the past two years.  Ultimately, owners, coaches and GMs walk a fine line, learning when (or when not) to kowtow to superstars while still fielding a competitive team.  It’s a delicate balance.  After Dwight left Orlando, the Magic became a 20-win team.  When LeBron left Cleveland, Dan Gilbert saw his franchise lose over a quarter of its value that very same day.  No wonder he was so upset.  Since then LeBron has won two titles and Cleveland is still miles away from relevancy.

While it’s not always wise to tell players to just sit down and shut up, Houston nipped the Asik thing in the bud by setting a precedent that there will be a clear chain of command that starts not with any of the gentlemen wearing uniforms but rather those wearing a suit and tie.  Chemistry is a key to building a winning team but so is structure and discipline.  So far, McHale and company have set the record straight, letting the team know who’s boss, something Stan Van Gundy in Orlando and Mike D’Antoni in Los Angeles failed to do.

We’ll see how long that lasts in Houston.