“I actually think the back is playing a little bit easier.”

-Phil Mickelson, after completing his third round at Muirfield

There he sat in the interview room, moments after logging disappointing, back-to-back rounds.  Phil Mickelson had shot a combined four over par on Friday and Saturday.  He was two over for the tournament.  While still in contention due to Muirfield’s difficult playing conditions, Mickelson winning his first ever British Open was an afterthought.  Entering Sunday’s round, he trailed by five strokes. 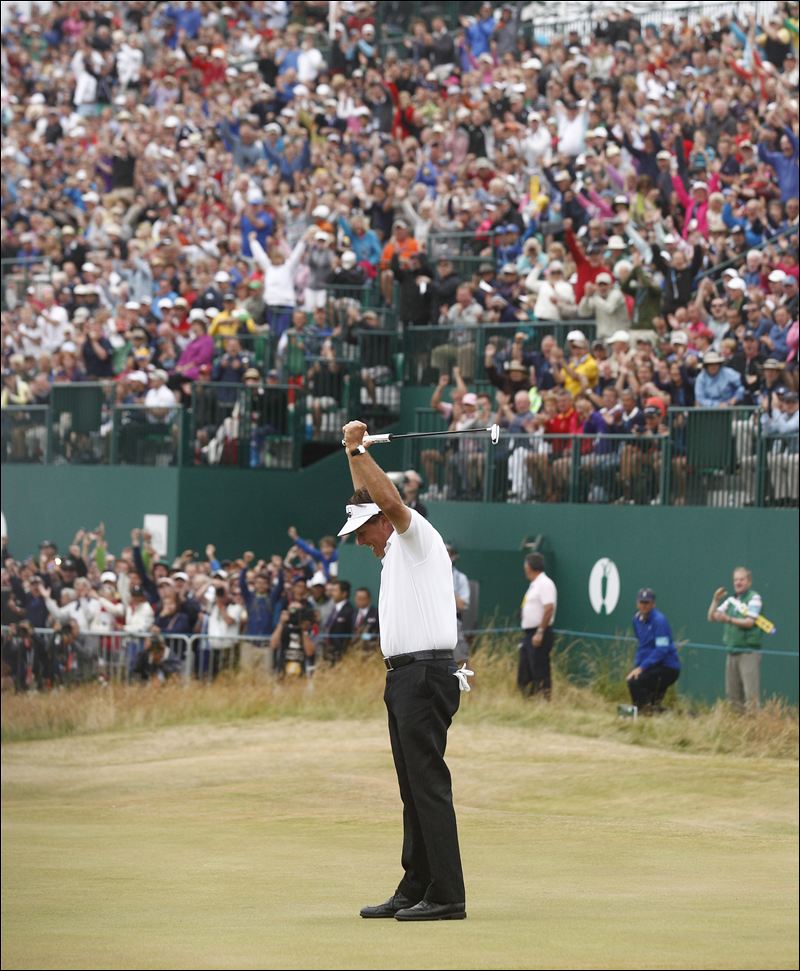 ESPN’s Tom Rinaldi concluded Saturday evening’s interview by asking Phil what he thought it would take to win on Sunday.  Phil boldly stated he thought a score of even par would win the tournament.  Rinaldi second-guessed him considering the golfers that were ahead of him at the time.  Those included leader Lee Westwood, Masters Champion Adam Scott and his arch-nemesis, Tiger Woods.  Phil said if he could shoot a round in the sixties on Sunday, he’d leave himself a good chance to win the Claret Jug.

Truer words have never been spoken.

As the fog settled in at Muirfield, Phil shot what he proudly stated was the round of his life, big words considering he’s now a five-time Major champion.  He shot a 66 on Sunday, six birdies, one bogey, a picture perfect round on an overcast day.  Mickelson birdied four of the final six holes to leave no doubt.  He had wrapped up the tournament with golfers left on the course.

While Westwood, Scott and Woods all found bunkers, rough and rounds over par, Mickelson was magical, the awkward fist pumps, that unmistakable grin.  His 66 was the best round of the tournament and the most clutch round of his life.

In the last two months, Phil has finished third in the Wells Fargo Tournament, second at the FedEx St Jude Classic, second at the US Open and first among the best golfers in the world at the British Open.  A winner of three of the four majors, only the US Open eludes him, a tournament he’s come in second place an amazing six times.

There was a time when Mickelson wasn’t a fan favorite.  He was always popular but his gallery paled in comparison to that of Tiger Woods.  I’m not so sure that’s the case anymore.  The cheers for Phil are as loud as ever, with good reason.  Phil is humble where Tiger is arrogant, Phil accessible, Tiger far more flippant.  Phil just seems more decent.  He embraces his wife and children after every emotional win.  With Tiger we can forgive, but never forget, that fateful night at Windermere.

Mickelson will never boast Tiger’s resume but he probably sleeps a lot better at night.  In his own words, winning a US Open will cement his legacy.  He’ll have to wait until next June to do so and at 43, it won’t be easy.  One thing is for sure.  He’ll have plenty of fans cheering him on as he attempts to do so.