There’s a time in everybody’s childhood when a parent or a teacher asks you “What do you want to be when you grow up?”  NY Jets QB Mark Sanchez was asked the same question by NY Daily News reporter Manish Mehta last week.

His response “Hopefully with a Super Bowl ring or two.”

The Jets are currently +1.5 home underdogs in the NFL game lines (view here) for NFL week one betting matchup against the Tampa Bay Buccaneers. With only Rex Ryan knowing if Sanchez will start in week 1, this would be a good time to sell your Sanchez jersey. 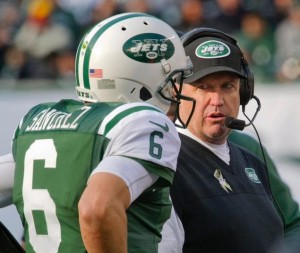 With the emergence of rookie QB Geno Smith, Sanchez’s 52 turnovers in the last two seasons are coming under the microscope.

“I know all about the turnovers. I know the goods, and the bads,” Ryan said of Sanchez. “There’s been great moments, there’s been bad moments. We’ll start right now. Somebody’s got to take the first snap, and to me, it is going to be a fair competition. A fair and open competition. But we’re not going to put both quarterbacks out there. So you have to put one out there, and really, Mark has had a good camp. He’s had a good training camp, as has Geno.”

Granted Sanchez is playing in the largest geographical market of any sports league that demands, and receives, all the attention America can give it. His team also fell just a win short of the Super Bowl during Sanchez’s first two seasons. You and I can probably agree that starting Tim Tebow last season would not have helped the Jets Super Bowl dreams, but think on the Sanchez Era and ask yourself “Are five more years worth it?”

6 Replies to “Sanchez Said What?”