I was rummaging through a friend’s old Playboy collection recently (no, we weren’t in his tree house) when I stumbled upon one of their college basketball preview editions.  I asked if I could borrow the magazine for a “Where Are They Now” piece to see how Playboy fared with their predictions that year.  And yes, I did look at some of the pictures.  After all, Cindy Margolis graced the cover.

2006 was a magical time for Florida fans.  Tim Tebow was slowly becoming a household name and right across the street, Billy Donovan had just sealed his legacy as one of college basketball’s top young coaches by winning his first national championship.

Playboy got that one right in their issue, ranking the Gators second pre-season.  In retrospect, that wasn’t all that much of a stretch.  Even though no school had repeated as national champions since Duke fifteen years earlier, Florida returned all of its starters.  There were, however, some other hidden gems from that basketball season.

So without further ado, here’s a look back at Playboy’s College Basketball Preview for 2007.

In all fairness, when is North Carolina NOT ranked pre-season number one?  Led by sophomore Tyler Hansbrough, UNC was an easy pick even though SI gave a tad too much attention to guys like Reyshawn Terry and Bobby Frasor instead of Brandan Wright, Ty Lawson and Danny Green who proved to be way better.  In fact, those three (all now in the NBA) weren’t even mentioned in the preview!  Ah, how I love when predictions go awry.  UNC did go on to have a pretty good season that year, garnering a number one seed.  They even made it to the Elite 8 but not for the reasons Playboy suggested.  The Tar Heels ultimately lost to a better Georgetown team that made the Final Four. 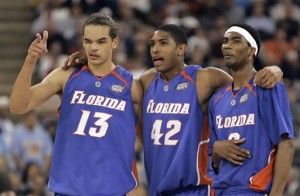 Again, with five returning starters and coming off a national championship, it was hard not to pick the Gators to do well.  When it comes to predicting champions in basketball, however, powder blue is always a more popular pick than orange and blue.  It just didn’t pan out for the Tar Heel faithful that year.  Since then, Gator alum Al Horford, Joakim Noah and Corey Brewer have all become solid pros.  Excuse while I reminisce for a moment.  Okay, let’s move on.

Kansas is also a popular pick to contend every year, with good reason.  That year, they were awarded a one-seed.  Brandon Rush, Julian Wright and Mario Chalmers were Kansas’ three best players as Playboy properly pointed out, however, they ultimately lost to UCLA in the Elite 8.  Chalmers is currently the only Jayhawk from that roster making a name for himself in the NBA and that’s because he’s playing alongside a guy named LeBron James.

Wisconsin?  Fourth?  Playboy couldn’t have felt confident about this pick going in.  The Badgers ended up a two seed with Alando Tucker leading them in scoring but they didn’t even make the Sweet 16, losing to UNLV.  Not a single player off that Wisconsin roster made a dent in the NBA.  You think that’s something most major magazines with pin-ups on their cover would look at before making their preseason predictions.  Or maybe not. 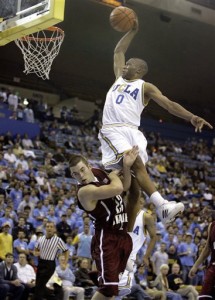 Here’s where things get interesting.  This Bruins team returned Arron Afflalo and Darren Collison from the national runner-up team of a year before.  They also enrolled a freshman named Russell Westbrook.  By the time March tolled, UCLA, a two-seed, made it all the way back to the Final Four, only to lose to Florida for the second consecutive year.  Ben Howland would take UCLA to a third Final Four the following year by adding Kevin Love but after not duplicating that success, he was fired by the school in 2013.  Westbrook and Love are doing just fine in the NBA.

Remember back when Greg Oden was relevant?  Oden actually graced the centerfold of this 2007 preview.   The once-healthy, seven-foot freshman took college basketball by storm that year.  That was back when he had good knees and well before he started texting people pictures of his junk… as far as we know.  Maybe that’s why he got the centerfold.  Oden led the Buckeyes in scoring (15.7), rebounds (9.7) and blocks (3.3) that season.  They made it all the way to the championship game behind Oden, Mike Conley and Daequan Cook.  Ultimately, Florida’s balance was too much but who’d have ever thought Conley, albeit a damn talented point guard, would have had the better NBA career?

We’re slowly starting to see how much talent existed in college basketball that year.  That Hoya team featured both Jeff Green and Roy Hibbert.  It’s no wonder they were a consistent threat to go far.  Those two led Georgetown all the way to the Final Four where they ultimately lost to Oden and Ohio State.  By the way, I was at that game.  Watching Hibbert battle Greg Oden that afternoon was priceless.  Hibbert was 9-for-13 from the floor in the loss.

Remember back when Jamie Dixon’s Pittsburgh teams were always expected to be good then end up falling short?  Some things never change.  This team was led by Aaron Gray, who is still in the NBA as a utility player, and Mike Cook, who is not.  For any of you thinking about putting together a college basketball season preview this year, I’d take a hard look at which teams have prospective NBA talent and go with that as a guideline for success. 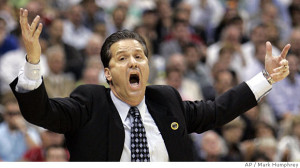 John Calipari hadn’t yet left Memphis for the bluer pastures of Lexington.  This was one year before he took the Tigers to the national championship game, losing to Bill Self’s Kansas.  They had Chris Douglas-Roberts on their roster in 2007 but didn’t yet have a guy named of Derrick Rose, who has turned out to be pretty good. Memphis, a two-seed, ended up losing to Ohio State that year in the round of eight.

One year earlier, LSU made the Final Four behind the size and talent of Glen ‘Big Baby’ Davis and Tyrus Thomas.  Thomas took off for the NBA leaving Big Baby to carry the load by himself, which he could not.  LSU finished 17-15 that year and missed the tournament altogether.

Okay, here’s where Playboy really starts to go downhill with their predictions.  While the Orange are always a popular pick to succeed, this was a down year for the program.  Despite finishing 24-11 (despicable by Syracuse standards) and fifth in the Big East (a conference in which they no longer play), ‘Cuse was NIT bound.  They didn’t do much damage there either, ultimately losing to Clemson in the third round.  Syracuse’s best player that year was Demetris Nichols who played exactly 18 games in his brief NBA career. 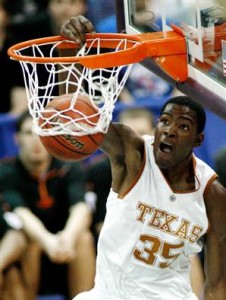 LaMarcus Aldridge had just been drafted but the Longhorns still had AJ Abrams, DJ Augustin and a skinny, young kid named Kevin Durant.  Can you imagine if Aldridge had stayed another season?  Durant averaged 25.8 points per game that season, garnering the Longhorns a four seed.  In case you don’t remember watching Durant play that year, he was lights OUT!  You just knew he was destined for greatness.  Texas ultimately lost to the more balanced scoring of a USC team in the second round.  Durant finished with 30 points that game but USC had five players score in double-digits.  The Longhorns only had two (Durant and Abrams).  It’s okay.  I think things turned out well for Durant in the long run.

When has Duke ever been ranked as low as 13th?  Probably before Mike Krzyzewski stepped foot on campus.  The Blue Devils had just lost JJ Redick and Shelden Williams to the draft and were forced to rely on the combined whiteness of Josh McRoberts, Jon Scheyer and Greg Paulus, which probably explains the drop-off.  Remember when Duke, a six seed, lost to Virginia Commonwealth, an eleven seed?  Yea.  This was that year.

If Playboy’s putting a Chase Budinger-led Wildcat team in the Top 15, talent must be starting to get pretty slim.  A rather ho-hum, eighth-seeded Arizona team lost to ninth-seeded Purdue in the first round that year.  Can we move on now? 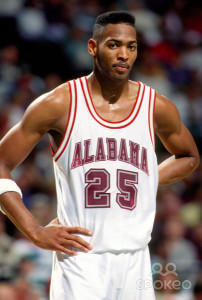 There was actually a time when both Arizona’s and Alabama’s basketball teams were good.  Flash back to another March Madness game I attended back in 1990 which featured the likes of Jud Buechler, Sean Rooks, Brian Williams, David Benoit, Keith Askins and Robert Horry.  Considering I couldn’t even find ‘Bama’s 2007 basketball roster because the internet is only littered with information about their football program, let’s assume they didn’t have any Robert Horry’s on the 2007 team.  They finished 20-12 that year but 7-9 in conference, missing the tourney altogether.

Playboy then picked Tennessee 21st (who made the tourney and only lost to Ohio State by ONE POINT in the round of eight in the best game of that tournament), Boston College 22nd (who made it but lost in the second round), Louisville 23rd (who a monkey could choose to make the tourney every year), Wichita State 24th (who missed the tourney but almost made the Final Four seven years later – good lookin’ out!) and Xavier 25th.  You’ll be happy to know that Xavier made the tournament as a nine-seed, right where Playboy projected ‘em.

I guess that’s why we buy the magazine for the pictures and not for their sports insight.  Ya’ know, if they’d like to call me in to research the upcoming season, I’d be glad to offer my services.  I hear they have pretty good benefits.