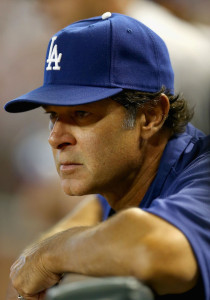 The decision to not fire Don Mattingly is an interesting case study in decision-making, luck and timing.

Only a few months ago, Dodger manager Don Mattingly’s head was on the chopping block, or at least that’s what we were told.  By the beginning of June, the Dodgers and their $220 million payroll, the highest in Major League Baseball, were nine games under .500.  A playoff spot was an afterthought, never mind a World Series title.

Magic Johnson and the rest of the rich folks that own the Los Angeles Dodgers had an important decision to make: keep Mattingly or make a change.

We know how that turned out.  A 22-year old, Cuban-born phenomenon named Yasiel Puig strolled into town and injected some life into an organization that hadn’t seen any since a gimpy, elbow-pumping Kirk Gibson rounded the bases after hitting one of baseball’s unlikeliest home runs.

That was two decades ago.

The rest is recent history in the making.  The Dodgers are now 27 games over .500.  They won 42 games over a 50 game stretch, an incomparable run, and have become one of the most exciting teams in baseball.

But let’s stop time for a brief second.

Let’s say hypothetically that the Dodgers had fired Donnie Baseball when a) the Dodgers were on their downswing and b) right before they called up Puig.

Let’s say they hired some other schmo to take his job or promoted whoever happened to be their third base coach at the time.  Manager X would be getting all the credit for the winning streak.  He’d immediately be dubbed the game’s hottest new manager while Mattingly, the outcast, would have a tough time finding a job.  How could he not have won with all that talent, we would have asked, while his replacement reaped all the benefits? 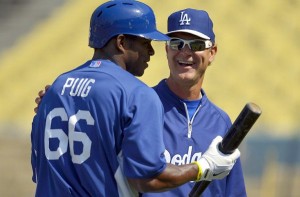 Well, with a little luck, some timely pitching (2.07 team ERA in August) and one really big Cuban, Mattingly went from baseball dumbass to genius in only six weeks.  I’m pretty sure he didn’t learn anything new about the game that he didn’t already know from his fourteen years as a player and six years as a coach.  So was this just dumb luck?

Let’s look at another professional sports team that plays its games about ten minutes from Dodger Stadium.  Neither Mike Brown nor Mike D’Antoni could make diamonds out of last year’s Lakers coal.  Not nearly as forgiving as Dodgers’ ownership, the Buss family fired Brown five games into the season.  Phil Jackson was once rumored to replace him but D’Antoni got the gig instead, leaving the Zen Master’s coaching legacy intact.  Meanwhile, we routinely knock D’Antoni, and Brown for that matter, for failing to win the big one while not even Jackson would have made champions out of a Lakers team rife with age and dysfunction.  If you believe any differently, you’re just kidding yourself.

So how much credit should we give managers and coaches?  Ultimately, the buck stops with them but Mattingly has become a shoo-in for Manager of the Year when only a few months ago, he was polishing up his resume.

So was it just good timing that suddenly made Don Mattingly the best manager in baseball?  Does he go to sleep at night grateful for a guy whose name most Americans can’t even pronounce?

We could rummage through the history of countless, unwarranted fires and play what if.  One thing we’ve learned in the fickle world of college and professional sports is that it takes more than just talent to win championships.

History labels some men geniuses and others losers.   Nobody said that was fair but it comes with the multi-million dollar paycheck.  From the looks of things, Don Mattingly will be cashing those paychecks in Los Angeles a little while longer.