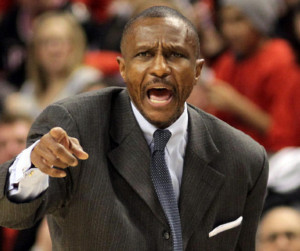 Toronto Raptors head coach, Dwayne Casey, goes into the new NBA campaign under pressure to deliver after narrowly surviving the chop over the off-season.

The former Minnesota Timberwolves man has been in charge of the Canadian side now for three years and is one of the most experienced coaches in the league.

Not only was he coach at the Western Conference team but he was also in charge of the defence at Dallas Mavericks in a successful three years spell where they won over 50 games in each of the seasons he was there.

Casey now needs to build on the strong finish to the last campaign. His side were around the .500 mark for the final 20 games.

Bill Bayno will join the Raptors coach on his backroom staff. The 51-year old was assistant to Rick Adelman at the Timberwolves but has also working on the coaching team at the Portland Trial Blazers.

Another new addition for Toronto is offensive coach, Nick Nurse. Casey’s side were criticised by sports betting pundits last season for being too defensive-minded; therefore, the coach who joins from Rio Grande of the D-League, is likely to help to help the team when it comes to scoring against their opposition.

Jesse Mermuys, formerly of the Houston Rockets, has been placed in charge of player development. The role will predominantly involve helping the younger players in the squad such as Jonas Valanciunas, Terence Ross, and D.J Augustin in the reshuffle ahead of the new season.

According to the bet365 site, the fourth new recruit is Jama Mahlalela, who has gained experience recently with the University of Toronto and has worked as director of basketball operations at NBA Asia.