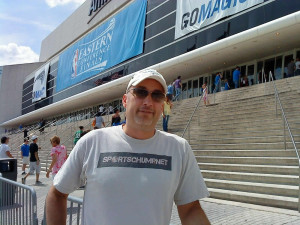 As a sports fan and furiously obsessed sports blogger, I subscribe to various online updates.  As a Magic fan, the Orlando Sentinel is one of those.

Orlando’s hometown newspaper recently, and rather fruitlessly, came up with a poll asking fans who they considered the best Magic player of all time.  One can’t help but wonder if that was a crack back at Dwight Howard’s continued whining from afar.  Regardless, it’s a great question, based on its absolute un-answer-ability.

A number of great players, Hall-of-Famers even, have donned the, grrr, Magic pinstripes.  I always hate that they did that.

But think about it.

The Magic have been around for twenty-five years and have been competitive for many of them (Note: they’ve made the playoffs 14 of those 25 seasons). And the bookmakers are tipping them to compete once again for years to come. 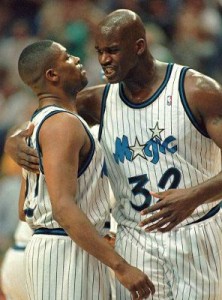 In 1995, their coming-of-age period, they knocked off Michael Jordan’s Bulls betwixt their three-peats.  That Magic team featured Shaquille O’Neal (first ballot Hall-of Famer but spent only four years in a Magic uniform), Nick Anderson (Orlando’s all-time leader in games played and field goals – so what if he missed a couple, big free throws), Horace Grant (it was a coup when Orlando signed him but he’ll still be remembered as a Chicago Bull) and Anfernee Hardaway (once considered the second coming of Magic Johnson, but then again, so was Shaun Livingston).

The Magic went 60-22 the season after they made it to their first NBA Finals.  They got summarily swept by the Chicago Bulls in the Eastern Conference Finals, led by a vengeful Michael Jordan who scored thirty points a game that series.

That was also the last time Shaquille O’Neal would wear a Magic uniform.

Orlando soon ushered in their next generation of talent: Darrell Armstrong and the scoring machine that would become Tracy McGrady.  Tim Duncan was wooed as a free agent but opted to stay in San Antonio.  Grant Hill signed with the Magic but the booted, suited wonder played only 200 games in seven seasons.  He earned $92 million over that stretch and that’s rounding down.

That experiment didn’t end well either.  Those teams never made it out of the first round of the playoffs.

Then came a third, Magic-al rebirth: the Stan Van Gundy years.  Only a few seasons earlier, Orlando had drafted Dwight Howard.  Despite reaching their second NBA Finals, losing to the Los Angeles Lakers, that team featured solid talent, including Jameer Nelson, JJ Redick, Hedo Turkoglu and Rashard Lewis, yet who of those would rank among Orlando’s greatest?

I’ll tell you where.  With a bunch of good players (O’Neal, Howard, McGrady, Grant, Hardaway, etc.) but none who will be ultimately associated with the Orlando Magic.  Dennis Scott, Darrell Armstrong, Nick Anderson, Scott Skiles were all Magic favorites but are their numbers retirement worthy?   And if they are, will the Magic be settling by doing so?  Heck, Wade Boggs played just over 200 games in a Tampa Bay (Devil) Rays uniform and they retired his number.  By that logic, why not let everyone in? 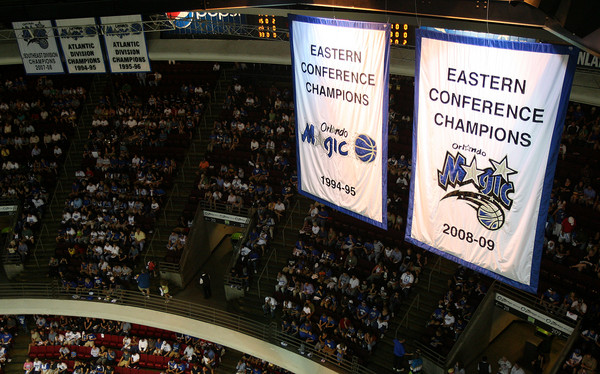 The Magic are an expansion franchise.  They don’t have the history other NBA franchises do.  The Boston Celtics have (rightfully) retired twenty uniform numbers, with more to come.  You might not be able to agree upon the greatest Celtic of all-time but at least you have a healthy selection to choose from.  The fact that Pat Garrity is fourth on the list of Magic players’ all times games played should tell us that the Magic have a long, long way to go.

As a Magic fan, it’s difficult for me to determine their best player of all-time.  If I had to choose the best player I saw in his prime while wearing a Magic uniform, it would have to be Tracy McGrady.  Even though he played only four years in Orlando (it seemed like longer), he led the league in scoring twice, including dropping over 32 a game in 2002-3.  If you ask me who meant the most to the franchise, despite the tragic turn of events of four missed free throws, it would still have to be Nick Anderson.   Shaq put the franchise on the map, but didn’t play there long enough.  Penny was money but, like so many others, his career was as fleeting as his role in Blue Chips.  And Dwight, well, I’ve said enough about him.

There’s a reason the Orlando Magic haven’t retired any numbers yet and that’s okay.

They will.  It’s just going to take a while.