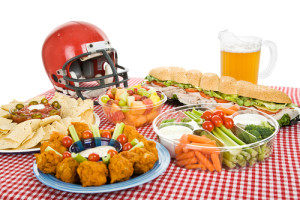 The Super Bowl has become an event like no other in American society. While most sports attract casual fans once in a generation (thanks to icons like Michael Jordan in basketball or Tiger Woods in golf), professional football draws millions of viewers every winter for the NFL’s championship game. Whether you have a real interest or not — and maybe you only care about the commercials — most Americans have watched at least one Super Bowl in their lifetime, and many of us have done so while attending a Super Bowl party.

The difference between a dull Super Bowl party, and one that guests will never forget, is the detail to which the hosts pay attention and the lengths reached to throw a classic and “super” party.

To create a fantastic football festivity for family and friends, put away the chips and dip, and go for your own touchdown with these following helpful hints.

Planning who to invite to your Super Bowl party is not an easy task. The key to any successful party is how well the attendees can get along with each other. You know that friend from work who takes sports way too seriously? The one who sees it as a personal attack whenever his favorite team’s honor is in any way besmirched? Yeah … it’s probably not a good idea to invite him to your party. Sure, you want people who are passionate about the game but you don’t want anyone so over the top they’ll take the fun out of it for the rest of the group.

If you have in mind a guest list that will probably get a bit lively — especially after a few (dozen) spirits, it may not be the best to invite your 80-year-old grandmother. She’d be uncomfortable and your guests might be too, and that won’t be a good time for anyone.

Try to keep your guest list to a happy medium. People around the same age (give or take a few years) will be your best bet to ensure a vibe everyone can enjoy.

The difference between a dull Super Bowl party, and one that guests will never forget, is the detail to which the hosts pay attention and the lengths reached to throw a classic and “super” party. Having a cheeky flutter with the bwin odds can also spice up the occasion.

Nothing gets people in the right milieu better than crafty decorations. Think about it; our mood is affected by our atmospheres, including the look, sound and feel of the venue — and the company we keep. Once you’ve invited the right people to your “super shindig,” it’s time to dress the place up with decorations that don’t have to cost you a quarterback’s salary.

Try unconventional decorations, like soft sports beanies bearing the names and logos of the teams playing. Have fun with the hats by buying enough for each guest to don during the game to show their allegiance.

Another creative way to spruce up the joint is to choose a theme or motif and decorate accordingly. For example, suppose you chose a Southwestern theme. Decorations could include cardboard cacti, paper tumbleweed and maybe even lassos. Whether your party is in Green Bay, Wis. or Greenville, N.C., you can set the mood for your personal Super Bowl crowd and forget whatever weather is happening outside your door.

Snacks are where you should spend most of your planning efforts. Your goal is to come up with an assortment of vittles that can accommodate a variety of taste buds and diet choices. You know your guests well, so use your best judgment as to which dishes make the cut and which will ride the bench. A few rules to live by:

• Make sure the food matches the beverages you’ll have on hand. When in doubt: Beer and a variety of soda plays well with others.

• Choose items that can be enjoyed warm or cool, not hot or cold. You won’t likely have the time to keep everything at its optimal temperature.

• Some like meat, others don’t. Your menu should be considerate of vegetarians and carnivores alike. Also, when possible, try a turkey substitute for a lower-calorie option for those trying to stay in playing shape.

Ben Franklin once said, “Failure to plan is planning to fail.” He wasn’t talking about Super Bowl parties, but he may as well have been. To throw the kind of party that will leave your guests raving for year, you need to plan ahead, get creative with your choices and pull it all off while still enjoying the game (or commercials). Use this guide, and here’s to a successful season and an epic Super Bowl party!

About the Author: Zach Harper is a dedicated sports blogger who throws a Super Bowl bash every year.