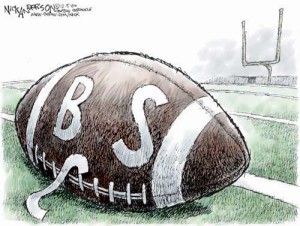 Welcome to the unofficial, one millionth rant about the Bowl Champion Series.

Take a deep breath though, sports fans. Those of us who live, eat and sleep college football can take comfort in the fact that, in only a few more months, the artist formerly known as the BCS will become a thing of the past, just like the 8-track, new wave and no instant replay in Major League Baseball.  These are all remnants of a former time and of ideas, once thought good, gone horribly wrong.

One can legitimately make the argument that the BCS has received an unfair rap since its inception fifteen years ago.  One can also argue that such criticism was wholeheartedly well-deserved.

The BCS was created with the sole intention of determining the nation’s two best college football teams at the end of the regular season.  Those two teams would then play each other for the national championship.

But this year, we may be on the verge of the BCS’ biggest controversy yet and it couldn’t have come at a more opportune time, with the BCS riding off into retirement, waving its final middle finger to college football fans everywhere, like leaving a bad tip at a restaurant they’ll never visit again. 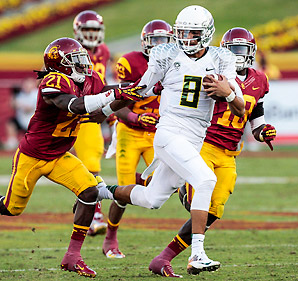 Here’s the dilemma.  There are several really good teams in college football this year:  Alabama (obviously), Oregon (also obviously), Florida State (perhaps surprisingly) and Ohio State (winners of 21 straight).  These top four teams have yet to lose.  They are a combined 33-0.  Over those 33 games, the Tide, Ducks, ‘Noles and Buckeyes have beaten their opponents by an average score of 48-14.  Can you say domination?  I knew that you could.

There have been a few other pleasant surprises, Baylor comes to mind, but as the season winds slowly to a close, these aforementioned teams might not lose a game.  If they don’t, even the most ardent defenders of the BCS won’t have a leg to stand on.

Top-ranked Alabama has four games remaining, home to LSU and a meaningless homecoming game, then at Mississippi State and Auburn.  They probably won’t lose any of those.  They’ll then play in the SEC Championship Game where they’ll square off against either Missouri or South Carolina, another game they’ll probably win.

Oregon plays at Stanford this Thursday night in a game they could very well lose.  If they don’t, however, they’ll also likely run the table with only unranked Utah, Arizona and Oregon State left on their schedule.  Oregon also has a conference championship game where they’ll play a team of lesser talent and win.  They may lose but odds are they won’t. 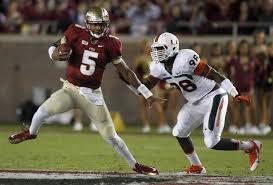 Similarly, Florida State has nobody left on their schedule that appears capable of beating them.  Ohio State has three games left with only their annual Michigan matchup posing a semi-legitimate threat.

And then there’s Baylor, who has five games left, three of them against ranked teams.  They’ll be an afterthought but at a minimum they’re turning heads by scoring nearly 64 points a game.  Who knows what would happen if they were seeded in a single-elimination playoff tournament against the aforementioned four?  It would certainly be fun to watch.

So where does this leave us?  Confounded, as usual.

These arguments serve as fodder for college football fans to debate in between Saturdays as we anxiously count down the days for the new-and-improved playoff system.  BCS defenders, the few that are left, still believe the two best teams will rise to the top by season’s end.  But this year, the what-if’s may ring louder than ever.  And some schools are about to be very pissed off.

More than ever before, a four-team playoff would suit college football to a tee.  Instead, major programs like Florida State and Ohio State might get left out in the cold, their fan bases having only one month left to pray that a) they beat their last few opponents by a substantial enough margin and b) those ranked above them are upset, all for the chance to face what most consider to be the best team in the nation: Alabama. 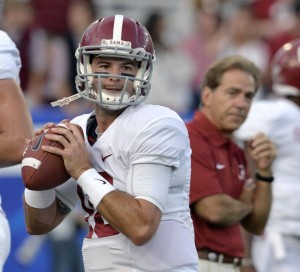 But again, we only know that Alabama is ‘the best’ based on who they’ve faced, and beaten, or more accurately, because they are the defending national champions and were voted preseason number one.  Theoretically, all four of those teams could make a case for that top spot.

If nothing else, the BCS has kept us talking about college football, but we’d be doing that anyway.  That’s hardly a case in its favor.

And so the debate gets more heated with each passing week.  If the losses come, and these teams do falter, we’ll be led to believe the BCS has once again fulfilled its promise of determining a true national champion.  When they don’t, the BCS will be missed far less than any 8-track tape ever played and we’ll all be left wondering why the hell we even bought them in the first place.

26 thoughts on “A storm’s a-brewin’: Why two major college football programs might be the first to usher the BCS into oblivion”