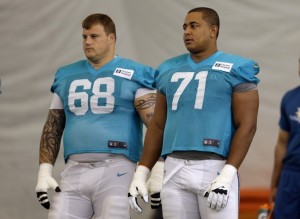 Excuse me while I whip this out…

I’m getting ϋber-tired of all this Richie Incognito talk.  Can we please just give it a rest… right after I’m done with my rant, of course?

I first heard about the voice mail bullying and racial epithet hurling that took place between Incognito and his Dolphin teammate Jonathan Martin last Sunday, right before the afternoon’s slate of games.  The talking heads employed by ESPN, as well as every other major network, were buzzing at the opportunity to tell us what allegedly happened between the two, which is interesting since none of them were around when it did.  An angry, threatening voice mail was all they had to go on.

Apparently, there was some vulgar language left on said voice mail.  Oh my!

Incognito, a rather intimidating 320 lb., six-foot-three, offensive lineman, and eight-year veteran was a little too mean, and obviously inappropriate (by normal standards) to second year teammate, offensive tackle Jonathan Martin.

In the whirlwind of conflicting reports that have surfaced over the past week, I’ve discovered that Richie Incognito is a former winner of the NFL’s “Good Guy Award”, an award which also graces Tim Tebow ‘s mantel.  I also read that Incognito has been considered by many in the NFL to be its dirtiest player.  Yet another report claimed that teammates have considered Incognito an “honorary black man,” whatever that means.  Another report labeled him a racist.

So which is it, people?

I guess it depends on whom you believe.  Hopefully, we all have the good judgment to decide that for ourselves. 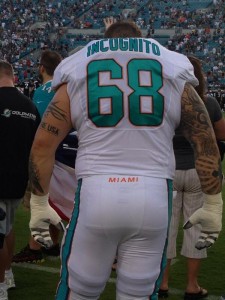 For the past several days, I’ve repeatedly reached for the mute button to stifle the incessant rattling of soapboxes that painted Incognito as a bigot, bully, and bastard, as if he’s the first white guy to ever call a black guy the N-word.

Earth to America!  That shit happens every day.

I don’t know what happened between Incognito and a teammate of his that may or may not have been able to take a little ribbing.  Like the fictional Dawson and Downey, Incognito now stands on trial with no Tom Cruise to defend him.  Who is it that ordered the code red?  Rest assured, the NFL will find out, or at least they’ll tell us they did.  Incognito’s may not be the only head that rolls when this all plays out.

Let it be clear, I would never condone bullying, racism, ignorance or hatred of any sort.  But I also understand that certain things go on within an NFL locker room, or workplace, and such happenings are none of our business, at least not to the extent that ESPN and every other media outlet would have us believe.  The Dolphins should have been able to squelch all this foolishness.  They are currently regretting not doing so.

There’s plenty of blame to go around in this debacle, which include Incognito, Martin and our sensitivities.  Let us not forget those who never played the sport yet boldly proclaim hazing is bad, demeans character, and is detrimental to the game as a whole.  To them, I suggest they make sure their children’s helmets are strapped on tightly while they ride their bicycles around the neighborhood.  Hopefully those folks won’t complain when the NFL resorts to two-hand touch. 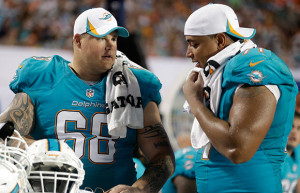 This entire Incognito-Martin episode shows us that, as a nation, we remain overly sensitive to race.  That may never change.

But before everyone with a microphone starts speaking their mind on what really happened between Incognito and Martin, they ought to keep things in perspective and not report this as if it’s something that’s never happened before.

In a few more days, this will all blow over, that is of course until the next time someone says something insensitive or inappropriate.  When that happens, hopefully we’ll take one giant step closer towards a greater understanding of our differences.  If not, at least I’ll have something else to write about.

41 Replies to “NFL athlete hazes/drops N-Bomb on voice mail, goes incognito. In other shocking news, racism and a misunderstanding of our differences still exists in America”