Welcome to my 27th post about steroid and PED use in Major League Baseball.  To be honest, I thought that number would have been higher as all we ever talk about these days is what athletes do off the field rather than what they do on it.  Such is the state of sports in our time.

The life and times of Alex Rodriguez is one such story.

Baseball’s quest to bury the fourteen time all-star is one of those long-running soap operas with characters that just won’t die.  Bud.  A-Rod.  Bosch.  It’s the tale we can’t turn our heads from until we have any sort of closure.  But will that closure ever come?

In the latest episode of As The Baseball Turns, the spurned accuser and PED-user stormed out of a grievance hearing that Commissioner Bud Selig failed to attend.  Cue the dramatic music.  Before leaving the room, A-Rod did his best Nikita Kruschev by banging on a table and shouting profanities at his accusers.  All he needed was to cleat the podium.

Shortly thereafter, he went on every soap box in America that would have him and criticized the entire witch hunt and those who are holding it:

I have sat through 10 days of testimony by felons and liars, sitting quietly through every minute, trying to respect the league and the process. This morning, after Bud Selig refused to come in and testify about his rationale for the unprecedented and totally baseless punishment he hit me with, the arbitrator selected by MLB and the Players Association refused to order Selig to come in and face me.  The absurdity and injustice just became too much. I walked out and will not participate any further in this farce. 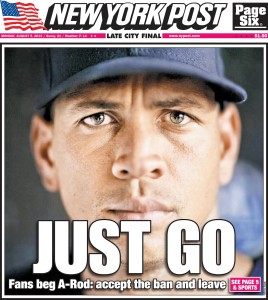 Where’s Vince McMahon when we need him?

If Major League Baseball has its way, Alex Rodriguez will be suspended for 211 games, essentially ending his career.  Rodriguez is 38 years old.  A suspension that long would mean he’d likely never play again.

A-Rod has very few fans left.  Despite his hysterics, however, A-Rod still has a point.  Think about it.  Only Bud Selig’s ineptitude could make us sympathize with one of the world’s most despised athletes.

A-Rod has boldly denied any wrongdoing this time around.  The problem is that A-Rod lacks any sort of credibility.  The pinstriper who cried wolf has no leg to stand on.  In a recent ESPN poll, 90% of baseball fans don’t believe that A-Rod has been clean since 2003.  However, we don’t care for Selig much either.  In a different poll, 75% of fans believe Selig should be forced to testify in the proceedings.  As you can see, we don’t like or trust either of these guys.  I’m not even sure we care about the truth anymore as we’re resolved to the fact that we’re never going to get it.  We just want to stop talking about it.

And so, Baseball’s hypocrisy continues.  What ever happened to their claim of having the toughest drug policy in all of professional sports or to the 50-game suspension for the first violation, 100 games for the second and lifetime ban for the third?  Where does a 211-game suspension fit into that spectrum?  I’m very confused.  I need a syringe and an abacus to figure this all out.

The A-Rod appeal promises to get uglier before it gets better which is astonishing considering how ugly it already is.  There will be no happy ending.  Either A-Rod is found guilty and suspended for the full 211 games which means he lied to us once again OR both parties meet halfway and A-Rod serves only part of the suspension which also means he lied but baseball conceded OR A-Rod doesn’t serve any of the suspension which means Major League Baseball either lied because they wanted A-Rod gone for good or they were inept and bungled the investigation altogether.

Either way, we’re still talking about it and will every time A-Rod steps to the plate, assuming of course, he’s ever allowed to do so again.

One of these days, both A-Rod and Selig will both go away.  Unfortunately we can’t fast forward our calendars to make that happen soon enough.

26 Replies to “Two guys we hate and the game we once loved: Baseball’s continuing saga of Alex Rodriguez and Bud Selig”