“Now if there’s a smile on my face, it’s only there trying to fool the public” 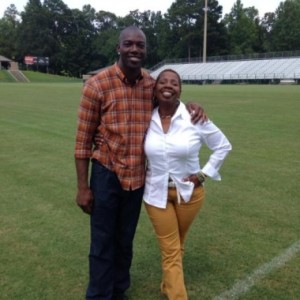 I had never heard of Iyanla Vanzant before last week but that’s probably because I’m not privy to the regular programming lineup of the Oprah Winfrey Network.  I am, however, a football fan so I’ve obviously heard of Terrell Owens.

Over the past several years, T.O. has been one of the most polarizing athletes in professional sports.  Watching these two meet for the first time on Iyanla’s Fix My Life series was as uplifting and meaningful as any performance Owens ever had over his fifteen years on the football field.

Many of us, myself included, have mocked Terrell Owens in the past without realizing the childhood torment that turned him into the pompous athlete we all came to resent.  That’s probably true with a lot of athletes we form opinions about without  understanding their plight.  Iyanla would probably tell us to take a good look in the mirror before we cast that first stone.

In this rather touching episode, the premiere of her fourth season, she travels to Owens’ hometown, Alexander City, Alabama, by the request of the former Niners, Eagles, Cowboys, Bills and Bengal wide receiver.  Little did he know what she had in store.

Trust me when I tell you, Iyanla keeps it real throughout their entire journey.   She had Owens crying nine minutes into the show.

“The penalties of your choices as a man cost you dearly,” she tells him as she gently pokes a finger into his chest.  She is about to break him down before she can build him up. 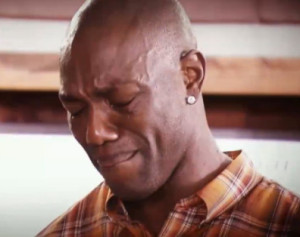 She forces Owens to take accountability for his actions and not blame the media, his coaches or his quarterbacks but before he can do that, she must understand the hurt that has resided within him since childhood.

His football career now over, Owens has ended up back up in his small home town, broke and with little to show for the tens of millions of dollars he earned playing professional football.  The household where he was beaten regularly by his grandmother, where his mother essentially abandoned him and where a man who he didn’t know was his father raised another family right across the street, is where Iyanla and Owens first meet.

Iyanla is inspirationally good at what she does.  She constantly reminds Owens that he needs to find the value and meaning in his life that playing football could only superficially provide.  She also warns Owens that if he doesn’t confront his demons, the four children he has with four different mothers will suffer the same fate.  His parent’s pathology must be broken.

Iyanla confronts both the father (off-air) and the mother (on-air) and refuses to allow anyone to not be accountable for how their actions shaped the man that Terrell Owens has become.

“Relationships are the playing field of life and right now there’s a man down,” she preaches.  She escorts Owens on to his high school football field, throwing penalty flags for all the mistakes he’s made in his life, explaining in football terms how these penalties “cost him yardage” to “keep him from scoring” in the things that matter most in his life.  She then makes him pick up the flags and carry them around for the rest of the episode to demonstrate his willingness to clean up his mess. 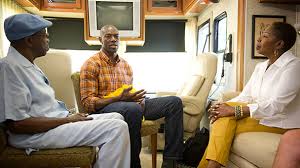 Ultimately, Owens confronts the father he never knew he had, who never told him he loved him, yet lived right across the street, expressing his deepest emotions and regrets about his upbringing.   I suggest you have your Kleenex ready for this encounter.

In only an hour’s time, Iyanla presents a very compelling episode that shows us the side of an athlete we never knew existed.

You can bet I’ll be watching when she does it again.  Just don’t tell anyone I’m watching the Oprah channel.