“There’s this incident that occurs with Michael Jordan and Steve Kerr on a basketball practice floor, where there’s a little tension between them, and eventually Michael reacts to it and hits Steve.  And at that point there’s a turning point for this team.”

Reminiscent of that infamous Jordan-Kerr altercation of yesteryear, LeBron James had himself a mini, mid-game spat Wednesday night with teammate Mario Chalmers that raised some eyebrows and provided further insight into the competitive demeanor of the world’s most dominant athletes.

The brief but heated shouting match occurred on the bench, during a time out, after Chalmers missed repeated, defensive assignments which resulted in Pacers guard and MVP candidate Paul George sinking two, wide open three-pointers.  The second of those three-pointers gave the Pacers a fourteen point lead late in the third quarter against the two-time defending champions.

LeBron had had enough. 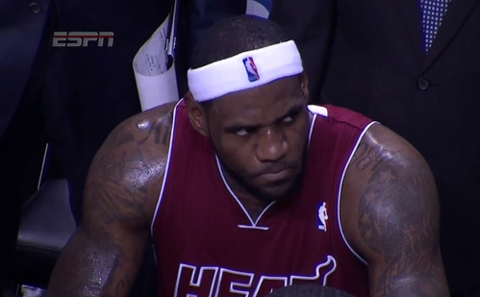 During the time out, after some jawing back and forth, James jumped out of his chair and lunged at Chalmers.  He had to be restrained by Udonis Haslem.  Assistant coaches watched on, taken aback as if it was something they had never seen before, a potential altercation nobody, especially Chalmers, wanted any part of.

It was a side of James we rarely see, the adrenaline-fueled rage the game’s greatest have always possessed yet we’ve only recently seen in LeBron.  The stars of Christmases past, Magic, Larry, Michael and Kobe, all might seem like cordial fellows but they’d step on your neck to get a win.  LeBron is finally among them.

I recently wrote that Peyton Manning was America’s most likeable athlete, the polished marketable never-do-wrong guy.  We respect his carefully crafted image but that doesn’t mean we don’t secretly enjoy when a pissed off Peyton publicly calls out a “liquored up” teammate for “running his mouth.”  Kickers and Chalmers should know their place in the grand pecking order.  Sometimes they need to be reminded of that. 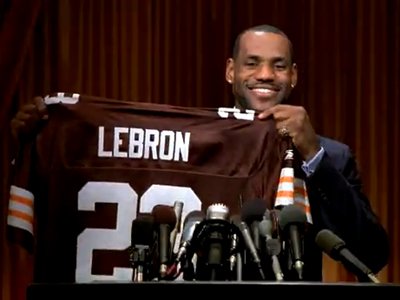 In this day and age of political correctness and the almighty importance of the marketing dollar, an apology after any such outburst is almost mandatory.  LeBron and Chalmers both tweeted formal, heartfelt apologies to one another.  Love you, bra.  We fault the athlete if we don’t get it.  “How could he have assaulted a teammate,” we ask, as if there are not a slew of co-workers we’d love to smack in the mouth if only we could get away with it.  Our dark side wanted to see LeBron put Chalmers in his place.  We want him on that wall.  We need him on that wall.

LeBron is more than just LeBron at this point, if that makes any sense.  Forbes lists him as the world’s 16th most powerful celebrity, just behind Coldplay and Tiger Woods but ahead of David Beckham and Robert Downey, Jr.   Not bad company if you can get it.  At age 28, not only is he one of four men to win four NBA MVPs but he is the face of the Miami Heat, as well as the face of the league.  Like it or not, putting a teammate in their place is what faces of the league must sometimes do.

While watching highlights of the altercation, I couldn’t help but harken back to when I heard the news that Jordan had punched Steve Kerr during a closed door practice.  It remains an inherent part of Michael’s unrivaled competitiveness, his lore, his sickness, that same legacy that Kobe, LeBron and every other megastar fruitlessly chase.  Like Jackson’s recollection of the incident above, Heat coach Erik Spoelstra called the James-Chalmers spat a “breakthrough moment.”  We’ll see how Miami responds moving forward. 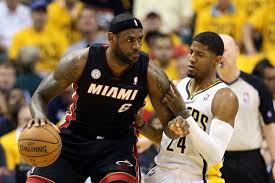 Wednesday’s Pacers-Heat game would have been just another regular season match-up had it not turned out the way it did.  Having already beaten Miami once, the Pacers had all the momentum… for three quarters.  They even had people thinking the Heat were vulnerable.

Had the Pacers beaten Miami with a gimpy LeBron, the critics would have chalked it up to Miami not giving it their all.  But the Pacers losing a late double-digit lead in the manner they did was the absolute worst way for them to lose, for it proved once again that the defending champions are still the team to beat, physically and psychologically.  Miami might not be the more complete team but they own the game’s most complete player and in the NBA more than any others sports league, that’s what matters most.

LeBron losing his temper every now and then is a good thing for the NBA.  It’s just not good for the other twenty-nine teams in the league.

26 Replies to “LeBron and Mario. Brothers?”