JERRY: Every time you get the ball you shoot.

Scene from Seinfeld, Episode 34, “The Boyfriend” 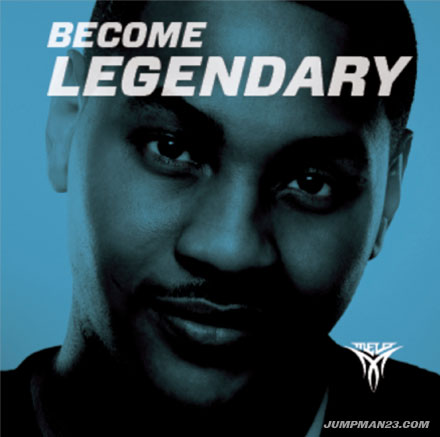 I can’t help but wonder when we are going to stop rewarding mediocrity.

For example, I guess I kind of sort of understand the world of marketing.  That’s more my uncle’s field than my own.  My uncle’s a man who spent his entire career pimping fast food, soft drinks and amusement parks, and rather successfully so.  He could probably tell us what makes an athlete marketable having worked with so many in the past.

But I would swear the ones he worked with in his day were worth a damn.  So many these days are not.

Let’s take Carmelo Anthony for example, who seems to be in as many commercials as any other professional basketball player.  However, Carmelo, leading scorer and shot-launcher of the nightmarish New York Knicks, has become one of the most incomplete, one-dimensional players in the league.  He’s second in the league in scoring but takes more shots than anyone else to reach that mark.  Since joining the Knicks, he’s averaged 44% from the floor.  Years ago in Denver, his third, fourth and fifth years in the league, he averaged over 48% which tells me not only is he forcing shots but more importantly, that he’s regressed as a player.

The 9-19 New York Knicks are a laughing stock and that is as much Carmelo’s fault as it is anybody else’s.  But Carmelo is missing shots all the way to the bank.  His marketing people are obviously working harder on their game than he is.  ‘Melo made $28 million last year, $8.5 of that in endorsements.  According to Forbes, his was the NBA’s highest-selling jersey.  His shoe sales rank third, behind only Kobe Bryant and LeBron James.

Say what you will about LeBron James, and my readers have said plenty, at least he has increased his field goal percentage every season for the PAST EIGHT YEARS.

Not only that, he’s won championships.  Becoming the best doesn’t happen by accident.  Think about it.  LeBron is shooting 60% this season!  That’s unheard of for a guy who takes as many jump shots as he does.  Do you know what it would take for Carmelo Anthony to shoot 60% from the field?  A miracle… and about 500 fewer bad decisions. 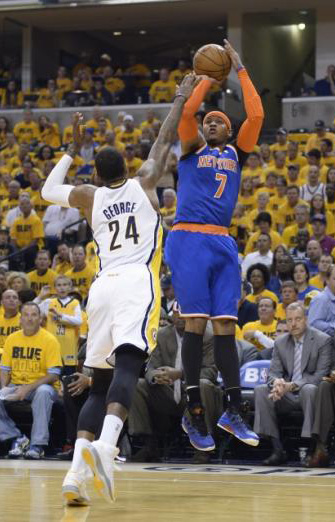 Comparisons between ‘Melo and LeBron are perfectly appropriate.  The two were selected two picks apart in 2003.  It actually would have been only one were it not for Detroit’s dreaded Dumars-Darko disaster.

Last year, Carmelo Anthony took 1489 shots.  That ranked third in the league behind fellow chuckers Kobe Bryant and Russell Westbrook.  This year, Carmelo leads the league in field goal attempts per game (21.1) and is second in total shots taken only to LaMarcus Aldridge, who shoots thirty percentage points higher than Carmelo.  LaMarcus’s Trailblazers are in first place in the West.  Right now, the Knicks aren’t even sniffing the playoffs and the Eastern Conference teams they play against are abominable.

I guess what I’m asking is… if you were drafting a team right now, would you even pick Carmelo?  He’s been dubbed the “ball-stopper” because once he touches the basketball, the next person to touch it is the one grabbing the defensive rebound after his missed shot.  So isn’t Carmelo more of a liability than anything else and if that’s the case, why would anyone buy anything he has to sell?

Look, I don’t begrudge Carmelo or anyone else who wants to maximize the dollars they earn during a short career window.  Believe it or not, I actually used to like the guy.  I just recognize him for what he’s become.  I can’t imagine what Knicks fans think every time they see him launch a contested shot from twenty-five feet but among those has to be that comparisons to Bernard King were drastically premature.  Shouldn’t one’s game improve after ten years in the league?  Or is that too hard to do in between commercial breaks?

Carmelo Anthony will test the free agent market this off-season and despite his shot selection, some team will pay him top dollar for his services.  I don’t mean to come off as some old curmudgeon complaining about the lack of fundamentals and reminiscing about the NBA’s glory days but it would be nice for someone to know their limits.  When I step on the karaoke stage, I don’t sing Journey or Hall and Oates or Led Zeppelin.  I know my range, how to pick my spots.  Before taking that next bad jump shot, perhaps Carmelo should learn his.

48 Replies to “Rewarding the chuckers”