On a glorious Sunday afternoon, NFL fans were treated to two captivating football games that, when it was all said and done, totally lived up to their billing. 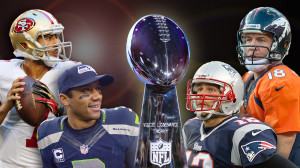 Twitter was abuzz as Tom Brady faced off against his arch-rival Peyton Manning followed by two future faces of the league, Colin Kaepernick and his 49ers squaring off against Russell Wilson’s Seahawks.

It was a day that featured two of the greatest quarterbacks ever, some questionable officiating, some even more questionable announcing, a gruesome injury and one rather startling post-game interview.

When the dust settled, the Broncos and Seahawks emerged victorious, giving us a Super Bowl that will pit the league’s most prolific offense against its stingiest defense, but not before Tweeters everywhere provided their takes on the afternoon that was.

The Broncos should be able to control LaGarrette Blount today, because if anyone knows how to hit a Blount, its someone in Denver.

Can we get a comment from Giselle on that Brady overthrow? 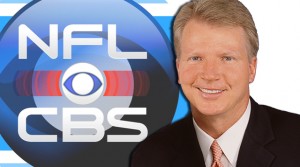 My card scores this round as 10-3 in favor of Phil Simms vs. Coherence.

Phil Simms takes 10 words to say what could be explained in zero.

It’s hard to listen to Phil Simms and think how he’s a 2x Super Bowl champion QB, but easy to think how his sons could suck at football.

I yell “Omaha” at work all the time. I also might have Tourette’s.

“Omaha” was the name of his sled.

We are a nation of archaeologists, translating the spoken runes of Peyton Manning.

Brady’s watching this game how he pees…sitting down

I guess the Patriots’ video camera wasn’t working this week

“I feel really bad for Tom Brady” – Nobody

The Patriots D and Chick-Fil-A’s phone have something in common today. No answers.

Get ready for 2 weeks of Omaha-talk heading into the #SuperBowl. 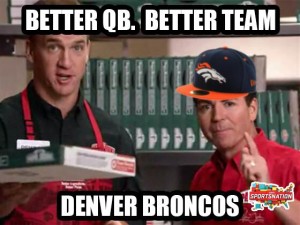 If you think Brady’s pissed now, wait til he finds out Giselle went home with Jon Bon Jovi.

Papa Johns introduces new pizza in honor of Tom Brady, features toppings only on one half and is called the “Incomplete.”

Meanwhile, Aaron Hernandez just won a box of juice in a close game of Tonk.

Dre gets a TV shoutout before a NFC Title game while Ice Cube has a mainstream movie currently in theaters. You’ve come a long way NWA.

Pete Carroll, staring longingly at Ann Wilson, remembering their affair in the 70s that inspired “Dog and Butterfly”

Ann Wilson approves of my nachos.

“Where can I get one of those sausage-pillows???” -Ann Wilson

I wish someone would do a story on these Seattle fans. (One that describes their intensity and loudness).

The battle of struggling Mulatto QB Championship game is not living up to its hype. #YallMakingDrakeLookBadOutHere

Coors Light: Our beer is so bad, our biggest selling point is that it’s really cold.

A Wilson hasn’t been under this much pressure since Tom Hanks sailed off that island with only a half dozen coconuts.

The Beats ad is the closest anybody in a Seahawks jersey has been to Colin Kaepernick. 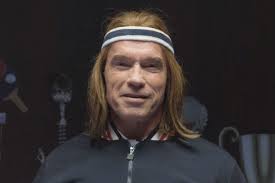 The 49ers deserve to lose this game just because Ahnold used to be the governor of their state. #BudLight

Jim Harbaugh half time speech: “Yes I’ve seen Falling Down. Why do you ask?”

I need to know the origin of the surname “Crabtree.” These are the things that keep me up at night.

It’s not a postseason until Marshawn Lynch incinerates an entire defense.

One day an archaeologist with a hat will discover the ruins of our civilization, and the NFL rulebook will be the last thing he understands 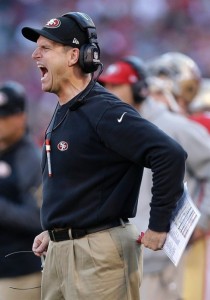 Jim Harbaugh would have been an awesome Real World roommate.

Pete Carroll thanks Ron Rivera for the confidence to go for it on 4th and 7.

Pete Carroll is what people think they’ll look like after a juice cleanse.

Jim Harbaugh thinks The Great Santini is about a dad who’s too soft with his kids. 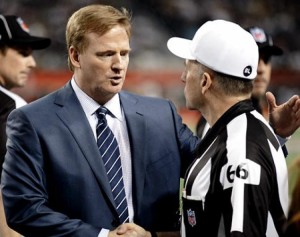 “After review, possession of a football doesn’t count if your knee is ripped apart during the play, 4th down Seattle”

If Waterworld wasn’t reviewable, Kevin Costner’s career would be in significantly better shape.

Note to other states: If you want your NFL team in the Super Bowl, legalize pot.

15 Replies to “As the World Tweets: Your AFC/NFC Championship Edition”