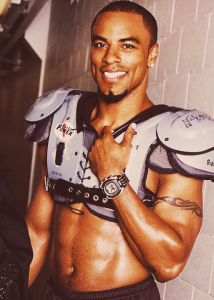 What the hell is going on with professional football players these days?

You have one guy, Darren Sharper, who was just arrested for date-raping the females he would meet in bars, as if being a good-looking and obviously wealthy, professional athlete wasn’t reason enough for a single girl to want to come back to your hotel room for consensual sex.

No, Darren needed that extra edge.  According to The Sporting News, he is under investigation for eight rapes nationwide.

Sharper is the same individual who in 2010 contributed to a book entitled NFL Dads Dedicated to Daughters where he wrote… “My daughter makes (me) mindful of how women are treated, undervalued and exploited, which is why I felt compelled to take advantage of this opportunity to speak up about domestic violence.”

Yeah, all that while walking around with a pocketful of roofies.  Compelling testimony if it weren’t entirely hypocritical.  Enjoy your time in prison, Darren.

Then we have Ray Rice who was arrested on charges of domestic violence.  Allegedly, during a spat in a Las Vegas casino, Rice knocked his fiancée unconscious.  I guess she didn’t bet on black.  We have yet to see the actual contact but TMZ did obtain video of Rice dragging his wife-to-be out of a casino elevator as if it were a burden to him.

And they say chivalry is dead.

Of course Rice is innocent until proven guilty but regardless of whether or not he hit her (several eyewitnesses say he did) he’s clearly guilty of not giving a damn about her well-being.  Notice how delicately he moves her legs out of the way of the elevator door so as not to inconvenience the next group waiting for a ride.

Sharper and Rice aren’t the NFL’s only black eyes lately.  Bengal Andre Smith was arrested early last year for carrying a loaded firearm into an airport.  Former Steeler Chris Rainey was arrested for simple misdemeanor battery of his (hopefully former) girlfriend.  Dallas Cowboy Jay Ratliff was charged with DWI after he ran into an 18-wheeler.  Cincinnati’s Robert Sands was charged with fourth degree assault on his wife.  Atlanta’s Michael Boley was arrested on child abuse charges.  Detroit’s Amari Spievey was arrested for third degree assault and risk of injury to a child after a child support dispute.  Arizona’s Daryl Washington was arrested for aggravated assault on an ex-girlfriend.  And let us not forget about Aaron Hernandez.  We’re still not exactly sure how many people this guy has killed. 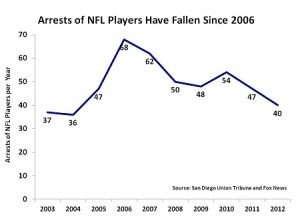 As you can see, the list goes on and on.  I’m sure there’s a study somewhere that claims the NFL is a microcosm of society and that the rate its players commit crimes is far less than in civil society.  I was too busy not beating up females or driving my car into a ditch to verify whether that was true.

Is there anything wrong with the NFL holding its players to a higher standard?  I’m not saying all NFL players need to be role models.  I’m saying they shouldn’t be hitting their wives or drugging women to have sex with them.

One would think the NFL deems such behavior acceptable, right on page one of its players’ handbook, with the frequency that NFL players are arrested for domestic violence.  Perhaps it’s time to rewrite the league’s code of conduct or at a minimum ensure its players know it exists. 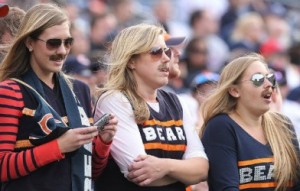 Female viewership is at an all-time high.  With its current concussion crisis, the NFL can ill afford losing such a broad part of its audience because its athletes are being carted off to prison for spousal abuse.  If your wife, girlfriend or significant other told you they no longer wanted to watch, could you blame them?

We’ve talked about this in the past.  The NFL provides us with a product/service just like our neighborhood bar, restaurant or drug store.  If we don’t like them, we don’t go, simple as that.  As customers, we reserve the right not to shop there.

I’m not suggesting we stop watching.  I am suggesting the league hold its players, and its teams, more accountable for their actions.

Here’s a suggestion.  If Ray Rice is found guilty of battery, not only should the NFL suspend him without pay, they should hold the Baltimore Ravens responsible as well.  Rice is scheduled to make $4 million dollars in 2014.  Should the NFL decide to suspend him for say, half the season, half of that four mil should go towards domestic violence charities.  Cut and dry.  Only then will I be convinced that the league genuinely cares about the behavior and responsibility of those who represent it. 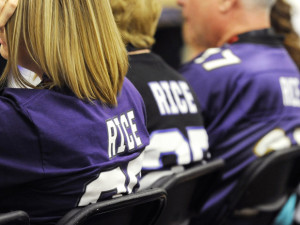 Playing in the National Football League used to be a privilege.  Not so much anymore.  Too often, we see guys acting as if the rules don’t apply to them, as if they’re above the law or even common decency.  It’s about time that stops and it’s about time the NFL takes steps to make that happen.  Removing players’ jerseys from the pro shops for fear of how it affects the league’s image is not enough.  Remove the PLAYER from the league as well.  Sharper’s actions were reprehensible, Rice’s nearly equally so.  Hold them accountable.

And if you refuse to do so and subsequently see a decline in ratings, you won’t need a crack research team to figure out why.

37 thoughts on “Sharper reasons not to watch the NFL”