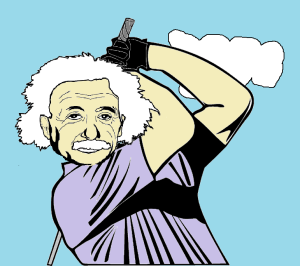 Albert Einstein is credited with defining insanity as doing the same thing over and over again and expecting a different result.  If that’s the case, I must be a lunatic for repeatedly yelling instructions at my golf ball in mid-flight and expecting for it to do exactly what I say.

What in the world am I thinking?

Picture if you will a beautiful Florida afternoon, a 7-iron hit cleanly from 155 yards out, a cold frothy beverage in the cart parked not too far from me and a half-lit, chomped-on cigar at my feet.  The ball I just hit appears headed for the green but then, suddenly, starts tailing off to the right.

Now imagine a guy that looks eerily like me, shirt untucked and still recovering from the night before, screaming “Get Left!” at the top of this lungs, as if those two words would have any effect on the ball’s path whatsoever, as if the golf gods were somehow listening and would be gracious enough to grant me one more wish, as if I had done anything during my flawed swing that would actually, physically cause my golf ball to… get left.

No such luck, but at least shouting it felt good. 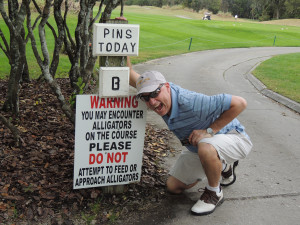 Foursomes the next fairway over will invariably look in my direction to see who’s yelling, probably thinking that I’m a loon as they drive off, until they realize they’re about do the same damn thing on their very next shot.

Ah, the glories of golf.

Yet time after time, I still insist, dare I say expect, for my little Nike Mojo to listen to me, convinced that one of these days, it just might.  In all likelihood, I’d have better luck talking to a wall or giving up golf altogether in favor of a cheaper, less frustrating hobby. 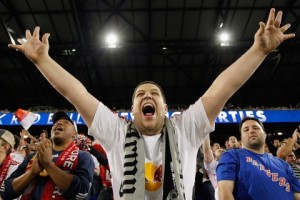 What is it about sports fans that would cause any ordinary person to suggest we seek therapy if they ever caught us yelling at inanimate objects hundreds of yards away from us?  If we’re at a basketball game and our favorite player on our favorite team puts up a shot at the buzzer, we all scream “Get in the basket!” as if the lot of us might collectively affect the outcome.  Heck, we’ll do that even if we’re not at the game.  We can be in front of our television sets barking out orders then high-fiving each other when they come true, as if we had anything to do with it.

We didn’t.  But we’re sports fans and that’s what we do.

At least in golf, one has some sort of control over the flight of one’s golf ball.  At least that’s what I keep telling myself.  And even though shouting at it while it’s in mid-air is logically a little too late to change anything, I’m going to keep doing what I do.  And if people continue to look at me funny, at least I’m giving them a valid reason to do so.