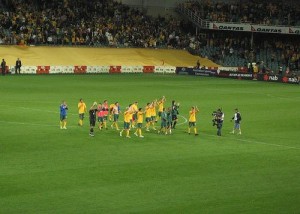 Let’s face it; Australia could hardly have been handed a worse card in the World cup draw; but sometimes, a tough draw can play to your advantage.

The truth is that few soccer pundits give the Socceroos a cat in hell’s a chance of progressing through the group stage – and who could blame them? If you were staking your life on the outcome, you’d probably say that Australia will be on an early flight home from Brazil next June. But life, and particularly football, doesn’t always play out as it’s supposed to. And this very fact is Australia’s biggest strength.

If you look at the other three teams in Australia’s group – namely, Spain, the Netherlands and Chile, then they’re pretty much all strong contenders. Spain and Holland contested the last World Cup final and Chile – on South American soil – have the strongest side they’ve had in a while; all of which points to an early exit for Australia. But at the same time, each side sees Aus as the whipping boys before the start and the Socceroos’ first game is against the weakest of the three – Chile on June 13th – a Friday.

So perhaps the date will prove to be an auspicious one for the Chileans? After all – everyone expects a comfortable Chile victory but we all know what happens when teams are too confident at football.

They’ll be looking for an easy win in their first game and will possibly have half an eye on their tougher games against the two favourites to qualify. This could play into Australia’s hands. The Socceroos don’t give too much away under Ange Postecoglou and he’ll have the game plan mapped out not to concede too early. If the Socceroos can achieve that – then anything is possible.

Chile scored more than anyone else ion qualifying – but also conceded more than any other team and if the Socceroos can hit them on the break – then a win is distinctly possible.

And really, it’s all about the opener. Chile is the team Aus has the best possible chance of winning against so it’s fortunate it’s also the opening game. To have any chance of qualifying, three points are a prerequisite here for the Roos and a win would really give them some fighting momentum – after which anything is possible.

Specifically, Australia could really put a little aerial pressure on Chile if their defender Marcos Gonzalez – the only fullback over six feet – isn’t selected. And even if he is, Australia stand a great chance from set pieces against a team with a pretty awful disciplinary record.

In short, don’t bet your shirt on an Australia win – but don’t completely discount it as much as the bookies have either.

With 32 Red, for example, Australia are the longest outsiders of all 32 teams to reach the quarter-finals at 51. This may prove a fun punt if the Socceroos can get a head of steam.

Similarly, if you play casino games here you’ll qualify for a bonus of $32 for each $10 which, if you get lucky, you can then transfer to the 32 Red sports book.

Whether you then decide to have a wild flier on the Socceroos as a patriotic bet – or another bet on the World Cup is quite another matter – but it all adds to the fun as we begin the countdown to Rio in earnest.

It promises to be the greatest World Cup of all tie, particularly as it’s on Brazilian soil.