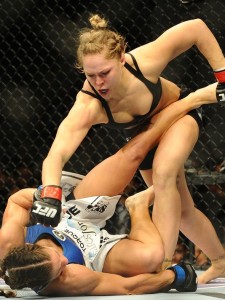 Let’s pretend we live in an indecent world with no rules or boundaries, you know, the kind of world in which Ray Rice and so many other professional football players live.  It’s a world where it’s acceptable to hit women.

Here’s why I bring this up.

One of the faces of MMA, Ronda Rousey, a female and a bad-ass one at that, recently boasted that she could beat Floyd Mayweather in an MMA match.

Now most of you might find such bravado ridiculous.  After all, Mayweather will go down, at least in his own mind, as one of the greatest pound-for-pound fighters in boxing history.

There’s no way a woman could ever beat a man in the ring, right?

Not long ago, I posted a list of professional athletes I’d most want on my side in a bar fight.  Rousey made that list.  Some of my readers scoffed at the suggestion, which was exactly what I expected.  With all due respect, I’m pretty sure that Rousey would kick the shit out of me and most of my friends if it came down to it.

But let’s get back to that fight.

Forget Mayweather-Pacquiao, a fight that would have saved boxing from its downward spiral, a fight that unfortunately none of us ever got to see.  That fight would have brought hundreds of millions of viewers.  A Rousey-Mayweather bout would be even bigger than that.  In fact, I’d dare to venture that, hypothetically speaking, if that fight were to take place, it would be the most sought after pay-per-view event in history.  Don King could finally make enough money to retire and for that reason alone, the fight would be worth hosting.

Men’s and women’s sports have never really interacted over the years, the most famous match coming between Billie Jean King and Bobby Riggs back in the Battle of the Sexes in 1973.  No punches were thrown but King beat Riggs in straight sets that day.  As patronizing as it might have been, it still marked a major moment in the women’s movement for equal rights.

Now just imagine what would happen if Mayweather fought Rousey or more importantly what if Rousey beat him?  That would be the biggest event, if not upset, in sports history. 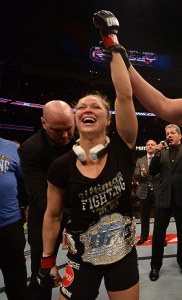 Do you believe in miracles?

So why should we be offended by this thought?  We see women get bloodied and battered when they fight each other in the ring.  It’s not a pretty sight to see but neither is it when men beat the crap out of each other.  So is the thought of Rousey fighting Mayweather that far out of the realm of possibility?

This is clearly a controversial idea.   You’d have plenty of people appalled at the thought and a long line of politicians getting on their soap box, trying to make a name for themselves, calling the fight immoral.

But is it?  It’s competition at its highest level, regardless of gender.  What’s to say a woman couldn’t compete against a man in that field?

This is a fight that will never happen.  America wouldn’t allow it.  It would make for a great screenplay though.

55 thoughts on “A fight that would never happen… but should it: Rousey-Mayweather”