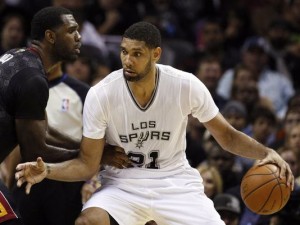 While the two-time reigning NBA champions—and despite last night’s 24-point loss at San Antonio, the undisputed title favorite once again—reside in the Eastern Conference, the Western Conference is where the excitement’s at, thanks to its plethora of point-producing teams and a deep pool of potential title contenders.

With a little more than a month remaining in the regular season, the Western Conference’s top five teams are separated by only 3.5 games. As it stands, NBA betting odds would likely be in favor Oklahoma City and San Antonio claiming the conference’s top seed for the playoffs, but 20 games leaves a lot of room for a team to make a run to the top.

The Spurs and the Thunder have finished 1-2 the last two seasons, with the Spurs taking the top seed in the strike-shortened 2011-12 season and the Thunder doing so last season. Following last night’s action, which saw the Spurs stomp Miami at home and the Thunder fall in Phoenix, the 46-16 Thunder hold a half-game edge over the 45-16 Spurs. San Antonio has the edge in momentum right now, as they’ve won five in a row, but OKC do have the advantage of hosting their remaining head-to-head showdown, along with already having locked up a potential tiebreaker by virtue of winning the season’s first three meetings.

While those two should end up 1-2 again, the Rockets, Clippers, and Blazers are all within striking distance and all have the ability to get on a run that could push them into one of those top two spots in the NBA standings should the Spurs or Thunder falter and leave the door open. Houston has won three in a row and 8 of 10, and the Clippers, who mauled the rival Lakers by a record 48 points last night, have won six in a row and 8 of 10, so they’re both in the right form at the right time. The Clippers managed to keep their heads above water while Chris Paul was sidelined by injury for more than a month, and with him back and at his dime-dropping best, they’re going to be a serious threat in the postseason wherever they end up seeded.

Last but not least, there’s the Blazers, who topped the standings for quite a while this season before sliding back down to earth. They went through a spell from late January to late February where they lost 7 of 10 to move from 31-9 to 36-18, but they’ve won six of seven to keep their hopes of a high seed alive. However, 10 of their next 13 games are on the road, including trips to Dallas, Houston, Memphis, San Antonio, Miami, Atlanta, and Chicago, and it’s tough to see them navigating that treacherous trek well enough to remain in the race for the top seed.