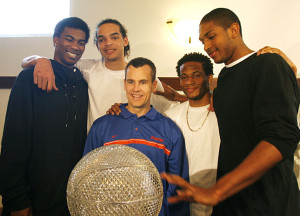 Any basketball team that suits up for Billy Donovan will have to live in the shadow of the Noah, Horford and Brewer-led team that won back-to-back championships only a few seasons ago.  It’s like having that athletic, bigger brother that was just better than you at everything.

But not so fast!  This 2013-14 team was about to step out of that shadow and do so quite boldly.  Sure, they wouldn’t have won back-to-back titles but they did a number of things those previous teams didn’t.  This year’s team went undefeated in conference play, the first SEC team ever do to so at 18-0.  This year’s team won thirty straight games.  Those other teams didn’t come close to that.

In the end, however, it was not meant to be.  The Florida Gators crashed into the wall their coach had warned them about all season long. 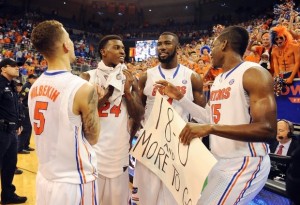 Earlier this season, Coach Donovan had a mural painted for this Florida team.  The mural portrayed his team all together in a van, looking out the window and admiring all their accomplishments, the win streak, the undefeated conference schedule, the personal accolades.  Yet none of them were looking ahead as the team crashed into the wall that lay in front of them.

That wall turned out to be the University of Connecticut Huskies.  As a result, these Florida Gators fell two wins short of a national championship that for many seemed like a foregone conclusion, their thirty-game win streak bookended by two UConn losses.

For the second time this season, Kevin Ollie’s UConn Huskies flipped the script on Florida and proved they were (gulp) the better team. 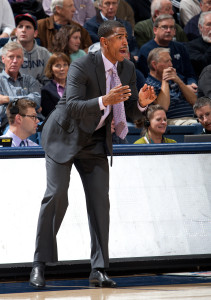 Is it possible that only a second year head coach, with 600 games less experience, could out-duel the great Billy Donovan?

Yes, that is clearly also possible.

This year’s Florida team would never be referred to as offensively potent, however, they were efficient and could beat you in a number of ways: inside-out, post-play, long range jumpers, pick-and-roll offense, defensive pressure turned into easy fast break baskets.  UConn made sure none of that happened.  They held the Gators to their lowest scoring output of the season: 53 points, the same amount Wisconsin held them to in one of their only other losses of the season.

In the end, Florida, who shut down teams all year with their defense, was shut down by another’s.  Florida’s pick-and-roll offense was non-existent.  Michael Frazier II, Florida’s most dangerous deep threat made one three-pointer in the opening minutes then took only two more for the entire game, making neither of them.  Team leader Scottie Wilbekin went 2-9 and looked like he was shooting in a gym with 70,000 people watching.  Their usual spark off the bench, Dorian Finney-Smith, was held to only one field goal.  And the always steady Patric Young scored 19 but many of those came too late. 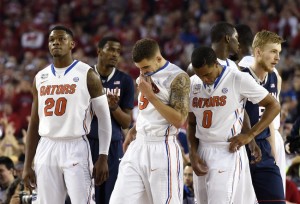 Simply put, UConn turned every single one of Florida’s strengths into a weakness, a game plan executed to pure perfection.  For the season, Florida averaged 13 assists per game and shot 46% from the field.  UConn held them to 39% and a paltry three assists.  Teams normally get three assists in a game BY ACCIDENT.  Furthermore, this Florida team, which was stout defensively all season, allowed teams to shoot only 40% against them… until the Huskies shot 56% on Saturday night.

It was the most un-Gator-like performance of the season and UConn had everything to do with that.

And now it is over.

I know one Gator fan that will for sure.