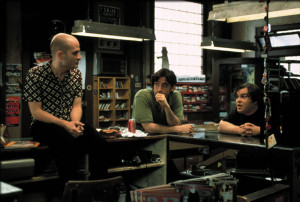 I started a series a while back that I haven’t followed up on lately.  I hadn’t felt the need… until now.  The series, which I like to call Sports Snobbery, is loosely based on High Fidelity, a film in which the three record store workers judge their clientele by the music they listen to.

Most, but not all, of my friends are knowledgeable sports fans which means we’ll sometimes mock those who are, shall we say, less informed in the ways of the sporting world.  Sure we might not be able to intelligently engage in the goings on in the Middle East but who the hell wants to talk about that stuff anyway? 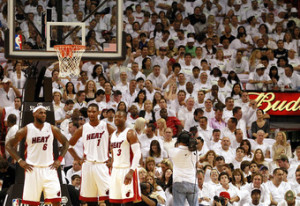 I was at social gathering the other day and I happened to be wearing a t-shirt that I got from a Miami Heat playoff game.  As is the norm in South Beach’s American Airlines Arena, the team likes to host a “White Out” where all their fans wear white.  On that particular night, to promote their white out, the Heat gave out complimentary white t-shirts that simply said “WADE” in bright orange and red letters.  It’s actually a pretty nice t-shirt, especially considering it was free.  They must have felt bad about charging us fifty dollars for two post-game cocktails at the Dewars Lounge.

So I wore the t-shirt to the gathering, not realizing it would be a conversation starter, not to mention the topic for Sports Snobbery, Part Deux.  Little did I know.

He seemed like a nice enough guy: a little younger, clearly geeky, an intellectual type, pursuing a post-graduate degree.  He wasn’t, however, intellectual enough to have ever heard of Dwyane Wade.  I guess he was absent the day they taught NBA in junior high school. 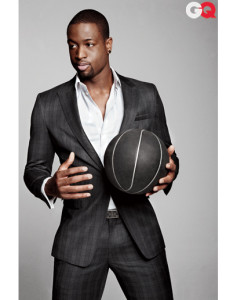 Now again, I’m biased.  I know who these people are, their alma maters, heck, I even know their scoring averages per game.  Dwyane Wade is a three-time NBA Champion.  He’s a Finals MVP.  He is the Robin to LeBron’s Batman (or vice versa, depending on whom you ask).  He has graced the cover of GQ and countless other magazines.   He’s engaged to Gabrielle Union.  He’s probably one of the five most recognizable faces in the NBA.

That being said, this guy sees my t-shirt, which clearly says “WADE” on it and asks me “What’s Wah-Day?” as if he had once been ridiculed for mispronouncing Sade.

Now, I could have been mean but I chose not to.  Surely this guy must know plenty of things that I don’t.  But unfortunately for him, I run a sports website and he doesn’t.

I mean, even if he hadn’t heard of Dwyane Wade before, which I would imagine is perfectly possible for anyone who hasn’t owned a television in the past ten years, who the hell pronounces Wade Wah-Day? 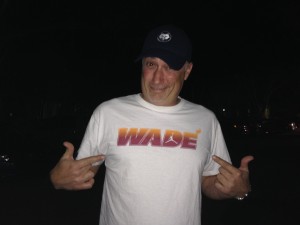 It’s what ducks do in a pond.  It’s what I do in a pool.  It is one of the most controversial court cases in our nation’s history.  Who the hell mispronounces Wade?

Maybe it’s Dwyane Wade’s fault for only having played in fifty games this season.  The guy is 32 going on 52.  Or maybe the guy’s just not marketing himself enough.  Now THAT’s funny.

I could see where if his first name were on the t-shirt (oddly spelled Dwyane), how that could be mispronounced.  But it wasn’t.  Wade was.  Or to some… Wah-Day.

The next time I wore the t-shirt, I was at my local supermarket.  The cutest, little eight year old boy saw my t-shirt, walked up to me, nodded coolly and said “Dwyane Wade.  Nice t-shirt.”

Someone give that kid a degree.