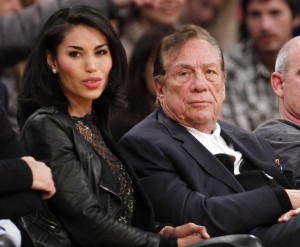 I Tweeted something deliciously off-humor the other day.  Far be it from me to do so.

I suggested that if Donald Sterling really wanted to get even with V Stiviano, he should release their sex tapes.

My comments regarding the hypothetical video of their alleged bedroom escapades warranted quite the reaction, not to mention this post but clearly, if Stiviano recorded a staged conversation framing Sterling for what will inevitably turn out to be the loss of his billion dollar franchise, there must be video of their sexual soirees stored on someone’s iPhone (#Ew!).

Look, we all knew, or at least assumed (without the gory, wrinkled and likely Botoxed visuals), that Donald Sterling had been intimate with the jezebel we’ve come to know as V Stiviano, fifty years his junior but clearly of equal moral fiber.

So I say, show us the goods.  We’ve suffered enough through all of this.  Put your money where your hatred is, Donald.  Find that video and sell it to TMZ.  Surely they’d pay the $2.5 mil you owe the NBA.  Since you’re already going down in flames, why not bring down the only (half) black person you ever (allegedly) cared for as well? 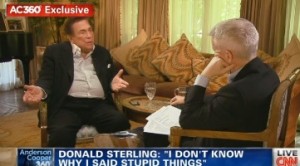 This all stemmed from the grueling and ratings-desperate CNN interview in which the increasingly opaque Anderson Cooper asked Sterling whether his and Stiviano’s relationship was sexual in nature.  Sterling declined to comment, referring to himself as a gentleman.  (LAUGH!)   Fail, Cooper.  You totally could have got that out of him.

Since then, apparently in an act of retribution (or perhaps senility – did I just conduct another interview?), Sterling claims that Stiviano was “an animal” in bed and that he ended up paying a “high price for sex.”

Hold on, don’t throw up yet.  This only gets better.

Media outlets confirm the ever-rebellious yet obviously marble-less Sterling won’t pay the $2.5 million he was fined and plans to sue the NBA.  Meanwhile former Commissioner Stern lathers himself with suntan oil on a deserted island somewhere unavailable for comment. 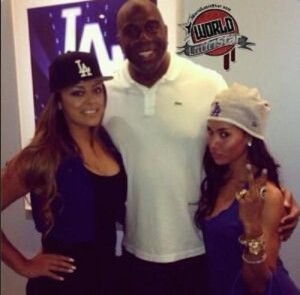 Clearly Donald Sterling doesn’t give a shit about anyone or anything.  Not race, not Magic Johnson, not his wife, not his team, not his reputation, not the underprivileged tenants he once threw out of their homes.  So why would he care about what some whore…. er, confidant who betrayed him?

So release the tapes.

Weeks ago, Sterling was the most hated man in America.  Now there’s a growing few of us who, while thinking he should die a merciless death, can’t help but hope he brings Stiviano to hell with him.

But let’s get to the real issue.

I know who my readers are so I’m pretty sure I’m not pushing any envelopes here.

Bill Clinton (did not) have sexual relations with his intern.  There was once a time not all that long ago where cigar-driven infidelity overwhelmed the media… and our imaginations.  We may have not known all the details but we pictured them.  We thought about what happened and where it happened.  We couldn’t help ourselves. 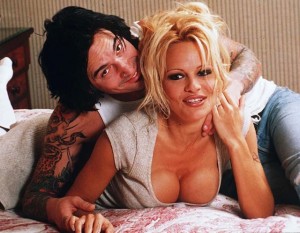 We also heard about the Tommy Lee-Pamela Anderson sex tapes.  At the time, we were infatuated with Pamela’s beauty and heard Tommy was packing so we were intrigued.  (Si, Si, very intrigued).

I’m not saying I watched the video in its entirety (I fast forwarded to the more loving parts) but net-dwellers did to the tune of over 4 million you tube hits.  That doesn’t include those who could afford the pirated DVD or who saw it on another site.

So, I ask you, and be honest, would you at least sneak a peek at a Sterling-Stiviano sex tape, again, not in its entirety but if the link were right there in front of you, and you knew it was at least in a darkened room, without too much detail, and you could hear her caring for him, loving him emotionally (or at least verbally and insincerely) and knowing she was leaving soon after services rendered with a blank check made out to her name, wouldn’t you want to know the extent of their relationship?  Wouldn’t you watch?  Just for some closure?  Whether she genuinely cared for him (yeah, right) and how far she was willing to go to show her dedication?

Come on, we’re already in Michael Sam’s bedroom so why not Sterling’s and Stiviano’s?

Or is that too sordid a story?

Maybe I’m the only pervert here.  But you can’t tell me if that video ever surfaced, it wouldn’t instantly become the most watched clip in internet history.  I know I’d give it a click.