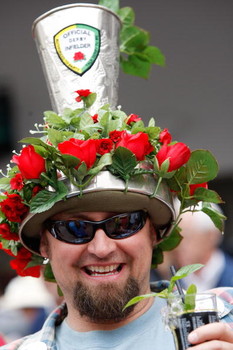 How do we explain our intermittent obsession with horse racing?

For three short minutes, three times a year, we drop everything we’re doing, put on a funny hat, make ourselves mint juleps and glue ourselves to the nearest television screen anticipating something that none of us really understand: a midget on top of a horse convincing it to travel as fast as it can.

I don’t mean to belittle the sport of kings but let’s be honest.  Despite its lengthy heritage and rich tradition in this country, the sport goes relatively undiscussed for 362 days a year.

We celebrate horses like Affirmed or Seattle Slew or Secretariat (coincidentally the last three thoroughbreds to win the Triple Crown) as part of our nation’s sporting history and for some inexplicable reason we can’t wait to honor another.  We rooted for California Chrome to win the Preakness on Sunday harder than we root against LeBron James… and that’s saying something. 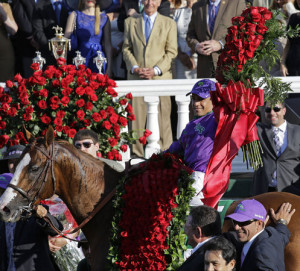 This weekend, California Chrome had a chance to etch his name into the annals of all things equine but came up short, finishing fourth in the Belmont Stakes, the final leg of the Triple Crown.  Since Affirmed last accomplished that feat in 1978, 13 horses have come and gone, winning both the Kentucky Derby and the Preakness but falling victim to the longer track at Belmont.

And so we wait another year.

But what is it that we’re waiting for?  Is it just to witness history?  Why is it that we all want this so badly?

We just saw Miguel Cabrera become the first man to win baseball’s Triple Crown since Carl Yastrzemski did it in 1967.  We celebrated that accomplishment… for a minute.

When the next horse wins a Triple Crown, whenever that may be, will the heavens open up and horse feathers fall magically from the sky? 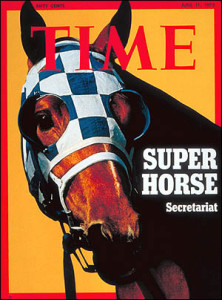 We should be careful what we wish for.  Such news is sure to warrant the incessantly annoying and overblown coverage ESPN will provide about the horse, its owner, its trainer and its jockey, inevitably labeling them among the best of all time.

Aside from all that nonsense, however, what significance will that moment hold for us?

Perhaps I’m not giving the sport enough credit.  Perhaps I’m diminishing the time and effort it takes to develop a championship horse.  Perhaps it’s only because I consistently lose money at the track with not even the faintest idea how to pick a winner.  Perhaps I don’t wear a funny enough hat.

I watched the race on Sunday.  So did 21 million other viewers.  According to the Nielsen ratings, it was the most watched Belmont Stakes since, you guessed it, Big Brown attempted to complete the Triple Crown in 2008.

So is it that we’re all just interested in witnessing history?  History happens all around us every day all.  All we have to do is pay attention.  What is it about that moment in horse racing that enthralls us so?

There must be some reasonable explanation.

And what if it doesn’t happen for another while longer?  Is that good or bad for the sport?  Does horse racing need a Triple Crown winner to survive or just the talk of it?  Professional boxing has fallen by the wayside for a number of reasons but primarily because we no longer have a heavyweight champion to believe in.  Is that what we long for?  Will a horse that wins three consecutive races suddenly make us feel better?

Clearly I don’t know jack about horse racing.  What I do know is that, like the rest of us, I’ll still watch because I’m supposed to.  I’m just unsure about what I’m cheering for.