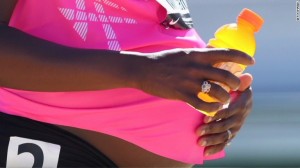 Okay, this is just weird.

I was at work the other day, looked up at the television to see a pregnant woman running track.

Have you seen this?

I had to do a double take.  I mean, I’ve heard of working late into one’s pregnancy to make ends meet but this woman is in full-on track gear (the numbers outstretched around her expansive belly) and she was running an 800-yard dash EIGHT MONTHS PREGNANT!!!

You know that baby’s in there, hitting the damn snooze button with his little baby hands, screaming “MA, C’MON!  I GOT ONE MORE MONTH!” while his mom is just trotting along merrily without a care in the world but that finish line.

Alysia Montaño is from Queens, New York, which means one thing.  She’s tough.  When her doctor gave her the thumbs up, that was all she needed. 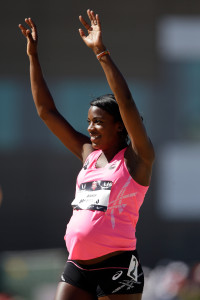 Here’s the thing though.  800 yards is no stroll in the park.  Let’s say for example, I lined up against her in a race to the finish line.  Sure, I could take her off the blocks looking back at her and sticking out my tongue but after a while, the massive and consistent liquor consumption not to mention fair amount of cigar smoking I partake in would probably get the best of me.  I’d start to wheeze and peter off around the five or six hundredth meter.  Meanwhile, here comes Montaño gleefully rounding that turn.  Keep in mind she’s running for two now.  I guess I shouldn’t have talked so much trash to her at the beginning of the race.  I knew asking her if she could hear the fat lady sing was a bad idea.

I’m not saying there’s any disgrace in losing a long distance race to a professionally trained athlete who just happens to be pregnant.  Let’s just say, however, if all my friends were there watching and I lost that race, I’d probably never hear the end of it.

Before all of you (and you know who you are) retort with the dreadfully trite “A woman could never beat me at any sport” nonsense, keep in mind 800 yards is eight football fields, gentlemen.  And after I lose to her, I’ll be sitting in the stands, plunking quarters into my oxygen machine, cheering her on so I can openly make fun of you in return.  Then we’ll both go grab a smoke and a drink.

Either way, I’m just happy to report I’m not pregnant.  Or having to run 800 yards.