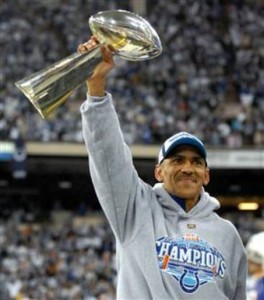 I’m not sure any of that has changed in the past few days but let’s just say his name has been in the news lately.  Furthermore, some of his values have come into question.

In a recent interview with the Tampa Tribune, Dungy was asked whether he would draft Michael Sam, the NFL’s first openly homosexual football player.

This is what Dungy said…

“I wouldn’t have taken him, not because I don’t believe Michael Sam should have a chance to play, but I wouldn’t want to deal with all of it.  It’s not going to be totally smooth … things will happen.”

Of course you and I weren’t in the room while these questions we asked.  They may have been taken out of context.

After the backlash of said comments, Dungy backtracked in a follow-up interview.

“What I was asked about was my philosophy of drafting, a philosophy that was developed over the years, which was to minimize distractions for my teams.  I do not believe Michael’s sexual orientation will be a distraction to his teammates or his organization. I do, however, believe that the media attention that comes with it will be a distraction. Unfortunately we are all seeing this play out now, and I feel badly that my remarks played a role in the distraction.”

Can someone please get Coach Dungy a shovel?

Since his comments went public, every sports analyst has sounded off on the man whose judgment we never questioned… until now. 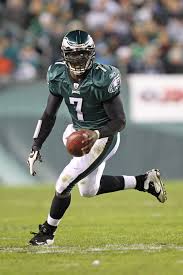 When Dungy backed Michael Vick’s return to the league, we all did a double take.  How could Dungy suggest Vick deserved another chance after the crimes he had committed?  Coach Dungy must be one forgiving soul.  Dungy’s conviction was so strong that he convinced almost all of us Vick deserved a second chance.

Certainly Vick’s reinstatement would serve as a “distraction” but why not allow it.  To err is human, to forgive divine.

The fact that Dungy backed the Vick-straction but not that of Sam could be, in some circles, misconstrued as Sam being less deserving without having committed a crime, depending on who you ask.

Tony Dungy is a god-fearing man.  He is a deeply religious man who is entitled to his opinions yet who also must understand that his opinions resonate.

I’m not here to get on a soapbox.  I’m just trying to make sense of it all.  I’m not suggesting Dungy was either right or wrong.  I am saying he was a little hypocritical.  If Dungy would give Vick a second chance or Tim Tebow a chance because he was a good (bible-thumping) locker room guy, why would he not draft Sam?  Both Vick and Tebow were clearly distractions.  How could a leader of Dungy’s magnitude not be able to deflect any negativity from Sam’s selection?  Clearly, introducing a new minority into the locker room brings with it the potential to teach acceptance of the differences in others, whether they are religious, socio-economic, racial or of sexual orientation.  I’m pretty sure Michael Sam doesn’t want to know what goes on in Tony Dungy’s bedroom.  Why should Dungy be in Sam’s? 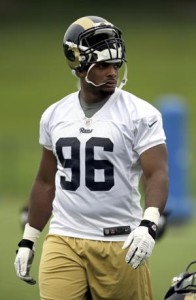 Sam has since shrewdly responded “Thank God he wasn’t the St. Louis Rams coach.”  Sam 1, Dungy 0.  The Rams organization has also openly stated that Sam’s presence is not a distraction.

Tony Dungy will survive his latest comments.  They weren’t offensive, they weren’t overly controversial.  They were merely honest and we can’t fault him for that.  He’s obviously not the only one who feels that way.  Otherwise we wouldn’t be having this conversation.

His comments do, however, indicate that based on his own personal and religious beliefs, Dungy might not be as forgiving a soul as we all thought.

On one otherwise forgettable night on the set of TNT’s inside the NBA, Charles Barkley shared his thoughts on tolerance.  They came right after NBA player Jason Collins announced that he too was homosexual.  Barkley said his mother had always taught him that, as they were a minority who had struggled for equal rights in this country, it was inherently wrong to persecute against others.

44 Replies to “The Dungy Dilemma”