Oh how a simple flip of the bat can ruffle some feathers.

On a recent road trip to Tampa Bay, the Boston Red Sox took on a three-game set against their division rivals, the Tampa Bay Rays.  The Rays took two of the first three but in the final game, David “Big Papi” Ortiz hit a home run deep to right field, leading his team to an eventual victory.  Papi then flipped his bat and took his time getting around the bases.

There has been some bad blood between these two teams lately, including a bench-clearing brawl and pitchers from each staff headhunting opposing batters every time they step to the plate. 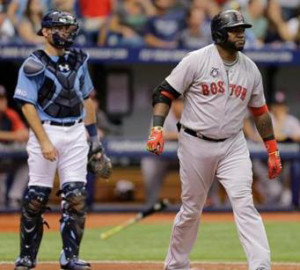 Well, after Papi’s long trot home (which took longer than it just took you to read this), Chris Archer, who allowed the home run, had some choice words for Ortiz.

In a post-game interview, Archer told the media he thinks Papi feels like he’s “bigger than the game” and that he doesn’t know “what makes him think that he can showboat the way he does.”

I’ll tell you who Big Papi is, young Mr. Archer, in case you haven’t been paying attention to Major League Baseball over the last ten years.  David Ortiz brought three World Series trophies to a city that hadn’t seen one in almost a century.  With a single speech and timely placed curse word, he gave renewed faith to an entire town after a devastating Boston Marathon bombing.  And he has become the most beloved sports figure in Beantown since Larry Bird and that includes Patriots poster-boy Tom Brady.

I’m a fan of young Chris Archer but sometimes a kid has to take his lumps.  This is one such time.  Suck it up, move on and don’t let a random microphone give you the opportunity to say something stupid.

Not only did Ortiz get the last laugh with his home run trot but afterwards he told reporters Archer shouldn’t be talking like he’s David Price because he’s only got “two days in the league.”  ZING!

Look for continued fireworks when these two teams meet again in late August.

Whatever happens in Vegas stays in Vegas… unless there’s a video of you dragging your unconscious wife out of a hotel elevator.  Then word gets out.

Of course the penalty for such heinous behavior is minimal if you’re employed by the National Football League so if you’re a fan of domestic violence, I suggest you put on some pads and practice up your 40-yard dash. 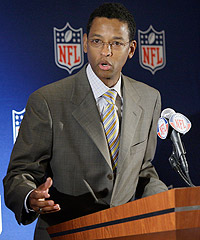 In defense of the league’s two-game suspension of Ray Rice, NFL Vice President Adolpho Birch fell on the sword for Commissioner Roger Goodell.  With regards to the suspension, Birch stated that were Rice “not an NFL player, I don’t know that he would have received any punishment from any other source.”

Way to take a bite outta crime, NFL.  I’m sure I’m not expressing any sentiments you haven’t already heard, felt or read but this was a perfect opportunity for the league to make a bold statement to its players and its fans, particularly its female fans, that such actions will not be tolerated.

Meanwhile, the NFL continues to ride on its high horse, raising ticket prices, mistreating its veterans and paying off multi-million dollar lawsuits with the simple signing of a check but rest assured, it is only a matter of time before the educated fan grows weary of this type of behavior.

The sooner the league realizes this, the better.

In response to the Rice case, ESPN blowhard and self-professed know-it-all Stephen A. Smith came out with this stunningly offensive gem. 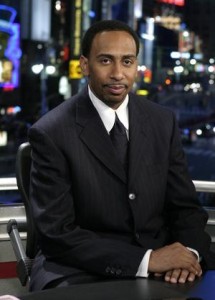 On his grossly unwatchable program, First Take, Smith stated on air that women should be aware of “the elements of provocation.”

Fire up the Twitter engines!  ESPN’s Michelle Beadle immediately and repeatedly blasted Smith for his thoughtless comments which essentially insinuated that women are the CAUSE of domestic violence.

ESPN has since suspended Smith one week for his comments, which is ironically one week less than Rice.  Smith has apologized for his statements, calling them the most egregious mistake of his career… not that any of us were listening. 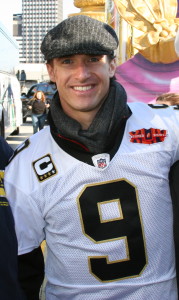 n a considerably lighter note, NFL veteran and New Orleans super hero Drew Brees opined that he could play another ten years in the league.  Brees is currently 35 years old.  When asked, Brees told reporters that he “understands the challenges” and asked “Why not?  If I can stay healthy, and I’m having fun and playing at a high level, why wouldn’t I wanna do that?”

Someone please inform Mr. Brees that the league is currently experiencing a concussion crisis.  Or perhaps he already has one.

Somewhat comically, Brees Tweeted that after he gave that statement, the league signed him up for two random drug tests.  Here’s hoping he passes them for we all know how hard the league comes down on players who fail drug tests.

In another potentially inflammatory interview, Urban Meyer’s wife told the Gainesville Sun’s Pat Dooley that Gator fans should just “get over it” with regards to her husband leaving the University of Florida for Ohio State.  Sweet, we can all hate her now too. 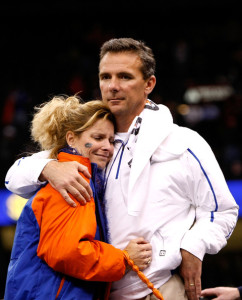 Of course, Gator fans haven’t “gotten over it.”  Perhaps it was the way Urban Meyer left Florida.  Perhaps it was the way Florida fans felt Meyer lied, saying he’d never coach again because of his decreasingly poor health and his desire to spend more time with his family… that is, until the Ohio State job became available.  Maybe it was the way Meyer left the cupboard bare or that he overlooked behavioral discrepancies like the ones Aaron Hernandez partook in while enrolled at the University.  Maybe it’s that Gator fans feel he felt Ohio State was a better job.  Or perhaps Shelley Meyer just doesn’t understand.

Either way, Florida fans are not about to forgive and forget per her command.  At least none of the ones I know are.

And finally, after a recent post-practice interview, his first healthy one in years, Chicago Bulls point guard told reporters that he was finally “there” and ”playing with confidence” after playing successfully and without pain for the first time on multiply-repaired knees.

Let’s all hope so.