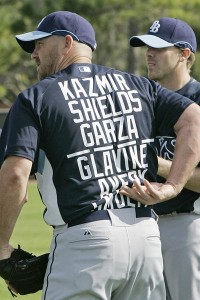 This time around was different.

The Tampa Bay Rays have lost big name players in the past, faces of the franchise, players their fan base had come to know and love.  Scott Kazmir, Matt Garza and James Shields were all solid starting pitchers who left an indelible mark on the team.

All of them now pitch elsewhere.  As do Rafael Soriano and Fernando Rodney who each logged 45+ save seasons in a Tampa Bay uniform.

Rays fans have become accustomed to losing players who become too big, or rather unaffordable, for their team to keep.  We understand that our current circumstance limits how much the team can spend to keep marquis players.

But David Price was different.

I wrote six weeks ago that losing David Price, one of the game’s top ten if not top five pitchers, was inevitable.  Rays fans braced for impact. 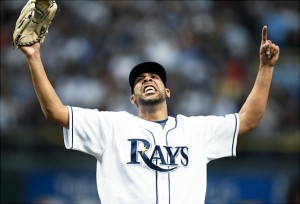 Then the Rays went on a torrid win streak, winning nine straight games sweeping Minnesota, St. Louis and taking two out of three from both Boston and Milwaukee.  Within a month, they went from 16 games under .500 and basically out of contention to flirting with .500 altogether.  They became baseball’s hottest team, winning 20 of 25 games.  People even started mentioning the P word.

And for a brief second, fans thought trading Price might not happen.  After all, why not ride Price out for the rest of the season and see what could happen.

Despite the win streak, mere minutes before the trade deadline, the Rays pulled the trigger on a three-team deal that sent David Price to an already stacked Detroit Tigers squad.  In return, the Rays received three players, none of whom are of David Price’s caliber but who will be forever linked to the loss of arguably the greatest pitcher in team history. 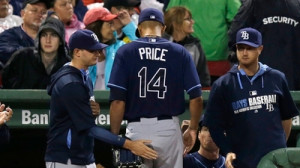 So the team moves on, one big locker now empty, hangers hanging there with no jersey, their former number one starter and mentor to the rest of the staff this much closer to a ring while his former teammates tread water in his absence.

Yes, this time around was definitely different.

Losing Price stung just a little more, hit a little closer to home, another reminder of the injustice of a league sans salary cap.

The Rays had the day off on Thursday after news of the trade broke.  They took to the field on Friday, at home, against the Los Angeles Angels.  You couldn’t see it through the domed roof but there was a dark cloud hanging over the Trop.  There had been for 24 hours, understandably.  The Rays kept things close, coming one clutch base hit short from tying the game in the ninth.  That base hit never came.  They lost 5-3.

David Price was not there to see it.

For the Rays and their fans, the Moneyball act is getting tired, Major League Baseball’s consistently cruel way of telling small market teams you can’t afford this so you can’t have it.

Yes, this time around was most definitely different.

Losing Price was the end of the innocence.  You heard that from every player in every interview.  Losing their teammate weighed heavily on their hearts.

It was a stark reminder that the game they grew up playing is nothing but a business.  Unfortunately for Rays’ fans, losing Price was business as usual.

21 Replies to “Parting thoughts on Price”