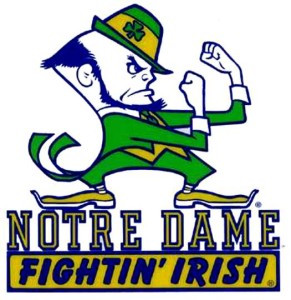 I’ve got an old friend whose name is Dan Gleason.  We used to call him “Rocket” Dan.  Despite being one of the elder statesmen among our merry band of bar-dwelling, hoop-shooting Gator fans, Dan had a solid game and a super quick release on his jumper, hence the nickname.

Dan Gleason was also, as you might have guessed from his surname, of Irish descent.  And somewhat ironically, he hated Notre Dame.  Not for the normal reasons most people hate Notre Dame.  Rocket Dan hated Notre Dame because he thought their mascot and team name were racist.

I had never before been privy to such a rant but he’d sit me down time after time, disgusted that people could overlook such a travesty.  The name “Fightin’ Irish,” he would argue, was inherently racist.  And don’t get him started on the little, angry leprechaun with his dukes up ready to fight.  To Rocket, that was as insulting and as prejudiced as they come.

That’s because they haven’t. 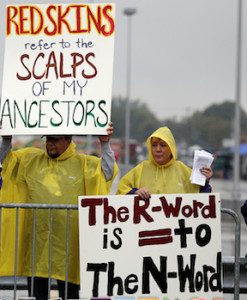 There’s been plenty of uproar lately, public outcry for team owner Daniel Snyder to change the name of his Washington Redskins to something a little more palatable, something a little less offensive.  Critics claim the name “Redskin” is derogatory and demeaning to Native Americans.  As of yet, the league has taken no official stance.  They could if they wanted to, a la NBA and Donald Sterling, but to date, Commissioner Goodell has opted a mums the word stance, which is actually a refreshing break from hearing him open his mouth to say something far more offensive than the existence of any mascot.

Snyder proudly proclaims the team name honors our nation’s Native American heritage, that the name represents the players, the fans and the district.  He has vowed never to change it which is amazing considering most owners would change their team’s name regularly if it meant generating more marketing and merchandising revenue.  But Snyder is standing his ground and taking a fair amount of heat for it in the process. 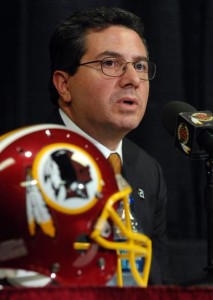 I don’t have any Native American friends.  I’ve disowned them for taking all my money on regular visits to the local Hard Rock Casino.  But I can tell you if there was a team called the Washington Jews, I’d probably find it offensive.  It’s not that I’m not proud of being Jewish.  I am.  But the word has been used with implicit hatred over the years and it just sounds improper.

I’ve never called anyone a Redskin, nor have I ever heard anyone call anyone else a Redskin, but I have heard plenty of racial slurs in my day and I’m pretty sure a team called the Washington Negroes (or worse) would also generate a fair amount of controversy.

So where do we go from here and how far do we allow political correctness to take us?  If the name offends one person, do we change it?  What about if it offends three, five, five hundred or an entire race or creed?  Then what?

Dan Snyder owns the team and until the NFL or perhaps the courts tell him differently, he could call his team the Washington Poopshoots and get away with it, not that I’d want to see that logo either.

Snyder’s a putz and a rich one at that but I don’t believe he’s inherently racist.  I don’t believe he sits back in his office chair, chuckling under his breath as he points a figuratively spiteful finger at all Native Americans.  No, I honestly believe he thinks his team honors that part of our nation’s heritage.

The problem is that a growing number of others do not.

And that fact will ultimately lead to Snyder changing the name of the team, for better or for worse.  And he will make millions on the new merchandising.  Then we’ll all scurry to find the next team name that we deem offensive.

I know one guy who would like to start in South Bend, Indiana.

38 Replies to “Mascots and prejudice: The ongoing saga of the Washington Redskins”