Florida State University and its Heisman Trophy winning quarterback, Jameis Winston, recently realized that Twitter can have more of a bite than Shark Week.

In keeping with the 21st century, someone in charge of the Florida State athletic brain trust (a contradiction in terms?) thought it might be wise to open a forum for all those with a Twitter account to #AskJameis whatever they wanted. 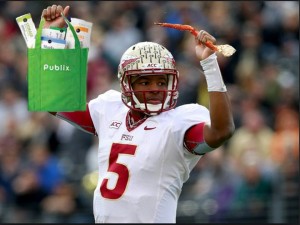 Winston, a high profile college sophomore, has had his run-ins with the law lately, including rape allegations and most recently, an incident where he was caught shoplifting crab legs from a local Supermarket.

Needless to say, when Jameis strolled on to the internet, Tweeters had a field day, grilling the twenty-year old about his indiscretions.  Despite the young man taking his lumps, this all probably could have been avoided had anyone in the athletic department had any sense.  Let’s just say it’s highly unlikely another major program experiments with this sort of thing in the future.

Either way, the #AskJameis fiasco made me think of a number of other ill-advised open Twitter forums that would generate a healthy response.

#AskTonyRomo about sustained success in the playoffs

#AskJohnnyManziel about career focus without distraction

#AskLeBronJames how to retire happily in South Florida

#AskNCAACommissionerMarkEmmert questions on how to properly reimburse the college athlete

#AskESPN about adventures in quality programming and ethics in journalism

#AskBrettFavre how to make a decision and stick to it

#AskFloydMayweather about lessons in frugality