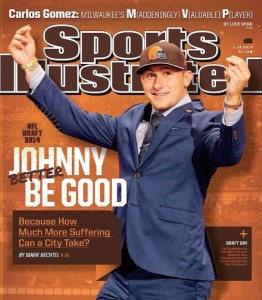 I was chatting up my local bartender after a mid-afternoon round of golf the other day when I stumbled onto yet another bizarre sports conversation.

The gentleman pouring the drinks had a few years on me.  A replay of some meaningless pre-season game was being broadcast on the television screen behind him.  It was a game in which the Browns were not playing yet suddenly, the network flashed Johnny Manziel’s image on the screen.

The bartender looked at me and asked if I was from Cleveland.  I wasn’t sure what he was getting at.  I told him no, checking carefully to ensure I didn’t give off a Cleveland vibe.  He then asked “Aren’t you sick of all this Manziel stuff?”

I confessed that I was.  I mean, who outside of Cleveland wouldn’t be?  The guy’s on TV nearly every waking second.

Personally I could care less whether or not Johnny Football becomes a successful NFL quarterback.  And I’m not about to predict, like everyone else, whether he’ll be a boom or a bust.  There’s no denying, however, he’s the biggest draw of the draft.

There are plenty of other rookie quarterbacks that will probably have more success in the league.  Take Blake Bortles for example.  But for whatever reason, perhaps because of his Heisman Trophy, perhaps because of the conference in which he played, perhaps because he’s been spotted hanging out with every celebrity known to man, Manziel’s cult of personality has taken over the airwaves, much to the dismay of the guy pouring my drinks. 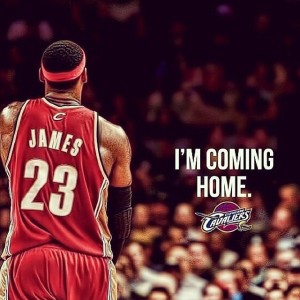 He was apparently also tired of all the LeBron coverage.  I’m not quite sure what this guy had against Cleveland but apparently he wasn’t a fan.  In my opinion, rooting against Cleveland is simply wrong.  The town hasn’t had a reason to cheer for anything in decades.  Cut ‘em some slack.

That’s when the conversation took a turn for the bizarre.  In fact, it may have been the first time in history a conversation segued from Johnny Manziel to Emerson, Lake and Palmer.  I was intrigued to be a part of it.

Apparently, aside from being Manzieled out, and no one can blame him, my bartender also had a beef with Emerson, Lake and Palmer and the Moody Blues not being inducted into the Rock and Roll Hall of Fame.  He mumbled angrily under his breath something about Madonna being in and those two acts not.  I mean, this guy was genuinely perturbed that the Moody Blues were not in the Hall of Fame.  No wonder he’s got a beef with Cleveland.  They shut out his depress-rock.

Now I normally don’t engage in discussions of politics or religion in a bar but sports and music are fair game. 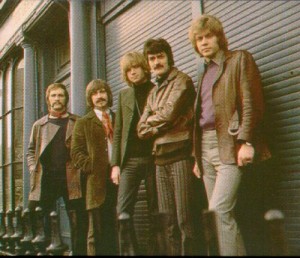 By my estimation, there have to be about three people out there ticked off that the Moody Blues have not yet been enshrined.  This guy was apparently their leader.  And I’m not knocking theirs or Emerson, Lake and Palmer’s contribution to music but to compare their bodies of work to Madonna’s is erroneous on all counts.

Emerson, Lake and Palmer could unite with the Moody Blues, tour the nation after releasing hit after hit from a new, groundbreaking album and STILL not have the impact of Madonna.  I’m no Madonna fan but here are the facts and they are indisputable.

The Moody Blues have sold over 55 million albums worldwide.  They have had, count ‘em, zero number one hits.  Nights in White Satin, their most well-known (and often unlistenable) song, made it all the way to number two in 1972.  Emerson, Lake and Palmer have sold over 40 million albums.  They never had a song hit top ten on the US Billboard charts. 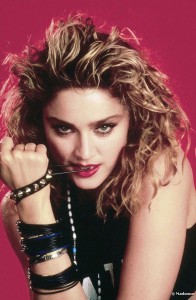 Madonna, on the other hand, has sold over 300 million albums worldwide.  That’s three times more than those other acts combined!  Need I continue?  She has had twelve different songs go number one in three different decades.  There was a time in our nation’s history when every single high school girl was wearing leggings, bandanas, mesh gloves and thought it was cool to be chubby.  That’s not because they were grooving to Emerson, Lake and Palmer.

I’m not quite sure I understand the criteria for inducting a musical act into the Rock And Roll Hall of Fame.  If it’s as arbitrary as Cooperstown, I’m sure the Moody Blues will be in there shortly and my bartender friend will celebrate.  (On a side note, can you imagine if the Rock and Roll Hall of Fame kept its inductees out for drug use?)

I decided not to counter such a ridiculous argument with facts.  After all, the guy was making my drinks and probably had a slew of boring Moody Blues story he could tell me.

But he did have one valid point.  Johnny Manziel is on television way too much.

In a perfect world, the Moodies will make the Hall, Manziel will take the Browns to the playoffs and we will all live happily ever after.

On second thought, if that means seeing Manziel’s mug on my screen more and having to listen to Knights in White Satin over and over again, I think I’ll pass.