“Life is just a fantasy. Can you live this fantasy life?”

I’m about to write a very unpopular post.  It wouldn’t be the first time.

It was 7:30 last Thursday night.  Only an hour remained before kick-off of the season’s very first NFL game: Green Bay Packers vs. Seattle Seahawks.

Like millions of other Americans who had been waiting months for this moment, I looked to the Worldwide Leader in Sports to fill that final hour with some in-depth analysis of what we were about to witness. 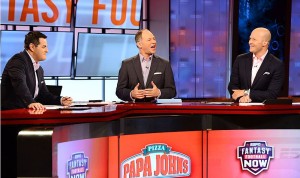 I should have known better.

Sixty minutes before game time, ESPN programming led not with a season preview, not with a breakdown of the upcoming game but rather with a program called Fantasy Football Now.  Never before had I yearned for Stuart Scott’s lazy eye so badly.

Minutes into the program there was no discussion of the upcoming game, or the season, or of the game’s many personalities.  Instead we were forced to listen to “Fantasy Expert” Matthew Berry blathering about an over-the-phone draft he had with Jay-Z.  Seriously, that’s what they led their broadcast with: name-dropping, giggles and a shit-ton of irrelevance.

This is what we’ve come to as sports fans, fantasy experts and hip-hop cameos. 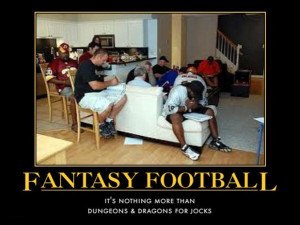 Whatever happened to breaking down the game, the matchups, the men who play it and not projecting how many points a player will earn for a team that doesn’t exist?  What Russell Wilson and Marshawn Lynch contribute to your team has become more important than what they contribute to theirs.

I’ve been on this rant for years.  Apparently nobody is listening.

Disgusted with ESPN’s coverage, I switched over to NBC only to find Peter King talking about Michael Sam, who for all intents and purposes is no longer in the league, nor was he in any way associated with either of the teams playing that evening.  Peter King has been a respected sports journalist for years.  Couldn’t he have vetoed any producer’s decision to discuss his gayness?  At least, for a brief second I forgot how over fantasy football I was.

Here’s my beef with all things fantasy, aside from the fact that it literally stops any meaningful conversation guys have about anything else.  Relationship problems?  Nah.  Wanna talk about work?   Fuggedaboutit.  If you’re not talking about whom you drafted where and why and how many points he won you this weekend, you’re just not talking at all.

Our obsession with the individual athlete’s accomplishments and how they affect our fantasy team takes away from the games being played and the teams we grew up watching.  Did the Buccaneers have a good season, Chump?  No, but at least my Chumpeteers went 14-2 and I won my league. 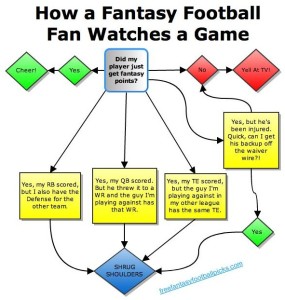 This may sound ridiculous to those of you in three or four leagues but fantasy football may ultimately become the death knell for the NFL, which is ironic (and hard to imagine right now) considering so many more people watch the sport because of it.  And trust, me, Roger Goodell doesn’t need any help running his league into the ground.  He can do that on his own.  #RayRice

It just seems to me that rooting, or should I say obsessing, about how one particular wide receiver will do on any given day takes away from the ultimate team sport.

Maybe I’m overreacting.  Maybe I’m the one who should take the “If you can’t beat ‘em, join ‘em” approach.  Or maybe, just maybe, like every trend, this too shall pass.

Then what would we do with all that spare time?

24 Replies to “Will the last person not playing fantasy football please turn out the lights?”