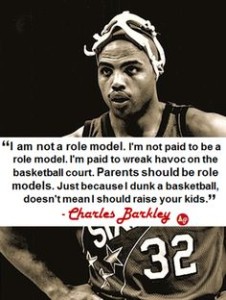 In one of the more poignant sports commercials of all time, Charles Barkley told America that he was not a role model.  Of course, Chuck was just trying to sell some shoes in the process but his point resonates to this day.  Athletes are not role models.  At least they haven’t been lately.

Barkley continued that parents should be role models, grown-ups who have far more hands-on time (or at least should) in their child’s development and not some guy who dribbles a basketball or runs in touchdowns for a living.

To this day, we lionize athletes because they do what we can’t but have always wanted to.  We watch their every game, wear their jerseys, spend our money on tickets to see them and put our lives on hold when they take the field of play.

Don’t believe me?  Walk into any classroom, office or watering hole on Monday and see how many people are talking about what happened on the football field only twenty-four hours beforehand.

Sports are our diversion.  But with every passing crime athletes commit, they become less so.  We might be finally warming up to that fact.

Who knew that the Round Mound of Rebound would be so right so many years ago?  It is LONG overdue that we stop holding Ray Rice and Danny Ferry and Jim Irsay and Adrian Peterson and Oscar Pistorius and Donald Sterling and Aaron Hernandez and Ray Mc Donald and Jerry Jones and Roger Goodell and insert name of random sports-related person here to a higher standard.  In fact, we should do the exact opposite for these guys who routinely say and do the stupidest shit. 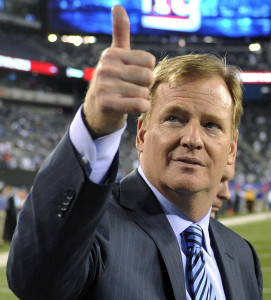 These athletes and owners and commissioners can’t relate to us just like we can’t relate to them.  These athletes never went to class so if you have any inkling of a college degree, you’re probably smarter than them.  These owners were likely born into their money.  They don’t struggle to pay their mortgages like you or I.  These commissioners, men who are supposed to be the most educated of the bunch with their law degrees and their impartiality, the average sports fan is the least of their concern.  All they offer is lip service and the protection of those who sign their paychecks.

But they are not alone in creating a world where sports figures run amok.

There has been nothing but outrage from every Tom, Dick and Harry ever since Ray Rice first put his hands on his wife and even more so when the league mishandled their investigation of this crime.  Yet how many of you watched the NFL this weekend?  I’m not throwing stones.  I watched too.  And I write about it on this very website and discussed the games with friends.  But it wasn’t a priority in my life.  Was it in yours?

I’d have been just as fine protesting this fucking league and going to the beach with a good book and a cold beverage.  Would you have? 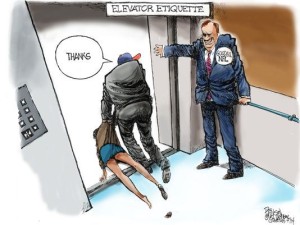 If you are REALLY outraged about Ray Rice and the league then do something about it.  Far be it from little old me to call a formal protest.  Half of you have already stopped reading by now anyway.

But if you really want to do something about it, I challenge you to stop watching the game.  Stop supporting their product.  Or at least stop making it a priority in your life.  That’s the only way we’re going to affect any true change in professional sports, by holding these people accountable for the actions.

Either that or shelve your outrage because you’re a part of the problem.

Keith Olbermann recently called Roger Goodell “an enabler of men who beat women.”  When we watch these games so are we.  It is your hypocrisy and mine that keeps the sport in business.

What are you going to do about it?

11 thoughts on “Rethinking the modern athlete’s place in society”