I’ve never personally compiled a top ten list of things to never do in my lifetime but if I were to do so, calling Mike Tyson a convicted rapist to his face would probably rank near the top.

Amazingly Canadian talk show host Nathan Downer doesn’t share those same priorities as he recently did just that.  Can you say death wish?  I knew that you could.  It’s unfortunate the studio cameras didn’t pan down to his Downer’s nether regions to catch the steaming, fresh puddle of urine after Tyson’s reaction.  Remember that scene in Teen Wolf where Michael J. Fox’s dad turned into a werewolf and growled at the school principal?  Exactly! 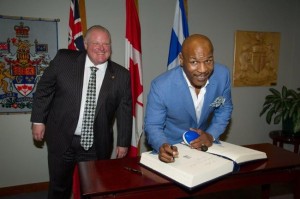 How did this all come about, you ask?  Well, apparently Mike Tyson is getting into international politics these days.  He’s supporting Toronto Mayor Rob Ford’s bid for re-election.  I’m not exactly sure why he’s doing so but who among us can explain why Mike Tyson does anything?

On the set of some Canadian news program, Downer asked Tyson whether he felt a convicted rapist backing Ford’s campaign would negatively affect his run.  The comment, which was horrendously out of line, triggered a reaction out of Tyson we haven’t seen in years.

Taken aback by the question, Tyson went old school Brooklyn on us, repeatedly calling the host a “piece of shit” and like I said, warranting the puddle of pee under Downer’s sofa.

Seriously, who the hell would ever say something derogatory to Tyson’s face even if they meant it?  Have you never seen this guy in the ring?  What kind of ignoramus would you have to be to call the former heavyweight champion and a guy who clearly has a screw loose a rapist to his face?  The guy once threatened to eat one of his opponents and another, he actually did!  Personally, I’d rather drive my car off a cliff and take my chances. 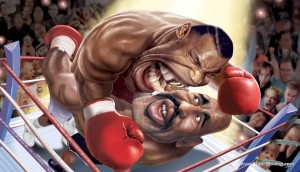 I’ve always been a Tyson fan so perhaps my perspective is a little skewed.  The guy did his time and paid his dues.  His rape conviction was questionable at best anyway.  Tyson appears to be in a good place these days, what with his pigeon collecting and his Broadway show.  We hadn’t seen Psycho T in some time… until that Downer interview and by the way, what a perfect name for the guy.  Downer.

Look, nobody wants to see Tyson go back to prison but none of us would have minded seeing Tyson lunge across the couch and start pummeling the guy.  It’d be the most entertaining boxing match we’ve seen in years.

I ran into Mike Tyson once at a Las Vegas sports book years ago.  For a brief second, before his posse caught up with him, he stood there alone, his back against the wall, his skin tight shirt wrapped around a body you immediately recognized as Tyson’s.  My buddies and I contemplated whether to go up to him and ask if we could have our pictures taken with the champ.  Trust me, the last thing we would have said to him at that point was “Hey, we know you’re a convicted rapist but do you mind taking a picture with us?”

Tyson has a checkered past.  Who among us doesn’t?  But he has done his best to put all that behind him.  It’s about time the rest of us do too.

11 Replies to “They Said What? Volume 8: Nathan Downer”