One of the most underrated and commonly forgotten press conferences of all time is Rasheed Wallace’s “Both Teams Played Hard.”  It falls slightly short of Allen Iverson’s “We Talkin’ ‘Bout Practice” but then again, what doesn’t?

Back in 2003, Rasheed Wallace’s Portland Trailblazers were coming off a playoff victory although you’d never know it by his stewy reaction to the line of questioning thrown his way.  Despite the win, his team was on the verge of elimination.  It was a series they would eventually lose.  In that instant, Sheed, who was always truculent with the media, gave us a moment that will forever live in press conference history.  He was later fined $30,000 for his behavior.  Apparently David Stern didn’t share his sense of humor.

After a tough Patriots loss this week, Bill Belichick channeled his inner Sheed by repeatedly answering media personnel with the one-liner “We’re on to Cincinnati.”  God bless them both for their controlled impatience.  These moody cats would make for sparkling dinner conversation.

Look, I get that reporters ask dumb things that warrant such responses and I don’t fault them for it.  They’re just doing their job.  There are times in my life when I don’t want to be bothered with stupidity either.  Fortunately, I’m a patient man.  I can only imagine what those in the spotlight feel.

Don’t get me wrong.  I love these pressers.  If it weren’t for the media’s inane line of questioning, we would be robbed of these precious moments.  How often do we get to reminisce about Rasheed Wallace and both teams playing hard?  The New England media and Bill Belichick made that happen.  For that, I thank them.

You can tell Belichick just hates these press conferences with every inch of his being, an unfortunate aspect of the job for many.  His sourpuss is as genuine as Iverson’s or Rasheed’s or Mike Gundy’s or Mike Singletary’s and of course we can’t let Denny Green off the hook.

Most of these unforgettable moments came after losses and that’s something the Patriots have been doing a lot lately.  While those inside that locker room will tell you their coach has a great sense of humor, no one in Foxboro is laughing right now. 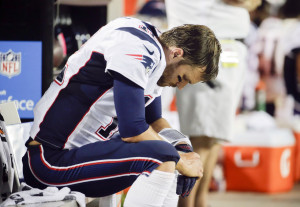 Their team is not good.

They have an aging supermodel quarterback who has nobody to throw the ball to.  Their usually impressive offense is nothing short of offensive.  They rank 29th in the NFL in yards per game.  Only Tampa Bay, Oakland and Jacksonville are worse.  That’s not exactly elite company.  They’re also 19th in the league in points allowed.  How do you spell mediocrity?  P-A-T-R-I-O-T-S.  As a general rule, not scoring and not keeping your opponent from scoring fail to coincide with winning records the Patriots are accustomed to.

Fortunately they play in a pretty mediocre division in which they’re currently in third place.  As the Patriots lose, the Bills, Jets and Dolphins lose along with them so all is not entirely lost.  Yet.

The Patriots have won the AFC East ten out of the last eleven seasons.  They probably will again in 2014.  We’ll find that out in a few more weeks.  If they don’t, at least we’ll have some entertaining Bill Belichick conferences to look forward to.