I enrolled at the University of Florida in 1987.  Since that time, I can recall the Gators losing three times to either Ole Miss or Mississippi State.

There have obviously been more than just three Gator losses to those two schools over that time but three in particular stood out more than any others. 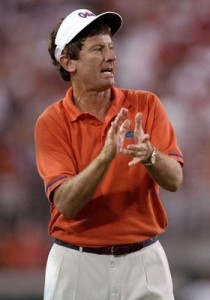 The earliest loss I can recall came in 1992.  It was a rare Thursday night game for the Southeastern Conference.  Steve Spurrier had already gotten his feet wet as coach of the Gators and his team was heavily favored headed into Starkville.  After all, the last five times Florida had played Mississippi State, they had beaten the Bulldogs by a combined score of 139-31.

A thick fog had rolled into Starkville that evening.  I remember as if it were yesterday.  My old roommate and I watched the game on the big screen of the bar I had been working at.  We were drinking Blackened Voodoo beer and had ordered a local pizza to be delivered.  My stomach became upset shortly afterwards.  Perhaps it was the pie, even possibly the beer but it was more likely the beating Mississippi State handed us that night.  The final score was 30-6.

The second loss to a Mississippi-based team came at the hands of instate rival Ole Miss.  I was watching that game with an ex-girlfriend, her sister and her sister’s boyfriend.  We were on some fancy boat the boyfriend had rented for the weekend.  He had money. 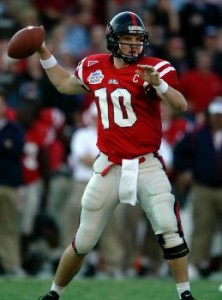 Mistakenly confident about that game, I watched as Eli Manning out-dueled Rex Grossman.  After all, why wouldn’t he.  If I recall correctly, the Gators went through a string of penalties during one offensive possession that left them with a third-down-and-57.  It was enough to drive Gator fans to drink and Ole Miss co-eds to have t-shirts printed up poking fun of Florida’s ineptitude.

The Rebels beat the Gators that game 17-14 and Eli accomplished something his older brother was never able to at Tennessee, which was beat the Gators.  He did so again the following year, this time in Gainesville.

The third most memorable loss to a Mississippi school came when Tim Tebow failed to convert a third-and-short against Ole Miss, prompting the whole “You will never see another quarterback play as hard as I will” speech and an ultimate run to a national championship.  That one didn’t sting as much but it was still Florida’s only loss that season.

What would really sting is if the Gators had to play either Mississippi or Mississippi State this season.  Both those hypotheticals would end badly for the orange and blue.

Where Florida’s program has taken a turn for the worse, Ole Miss’ and Mississippi State’s have taken sharp turns in the opposite direction. 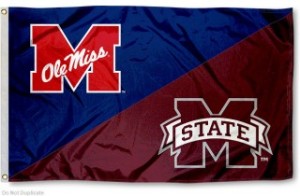 Both Ole Miss and Mississippi State are ranked in the top three for the first time in a coon’s age.  (I’m not exactly sure how long that is but I’ve been living in the South for a while now and have heard that expression used so I’m pretty sure it’s appropriate… I think.)

Ole Miss hasn’t been ranked as high as they are now (third) since 1964 when they were ranked first in the nation.  Archie Manning wasn’t even their quarterback yet.

Mississippi State’s only SEC championship came in 1941.  They have never been ranked number one.  Until now.

I don’t mean to denigrate the accomplishments of these two proud football programs but let’s be honest.  When we talk SEC dominance, these two schools are not the first that come to mind.

They are now, however, as there is clearly a new sheriff residing in the Southeastern Conference.  Two of them to be exact. 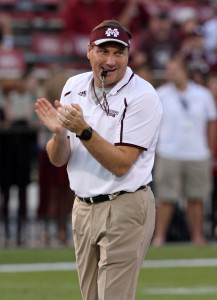 I’m not sure anyone without the need for bifocals and Dentu Creme can remember the last time the Ole Miss-Mississippi State game had national championship implications.  The annual match-up is usually an afterthought with little significance outside the Magnolia State.

Mississippi State’s head coach Dan Mullen was once the offensive coordinator for the University of Florida.  His team is 6-0 and a statue in his honor is likely being erected outside Davis Wade Stadium if he keeps this up.

Hugh Freeze is the head football coach at Ole Miss.  This guy was coaching high school ball ten years ago.  In only his third year at Ole Miss, he has his team 6-0 for the first time in over fifty years.

Whatever is flowing through the banks of the Mississippi is something we should all drive up there to sip on because what these teams have accomplished thus far is nothing short of miraculous.  To have them do so at the same time makes it lunar ecliptical.

Despite Florida State’s 22-game winning streak, one can make an argument for either Ole Miss or Mississippi State to be ranked ahead of them.  (Note: Pollsters did, ranking Mississippi State ahead of FSU in this week’s poll.)  That argument, however, is irrelevant.  What matters more is that the Rebels and Bulldogs have their student bodies rabid with hope of what no one dreamed possible.

Both squads are incredibly talented.  Ole Miss’s aptly named “Land Shark Defense” is second in the nation in points allowed per game.  Mississippi State, on the other hand, has one of the most potent scoring and rushing attacks in the nation. 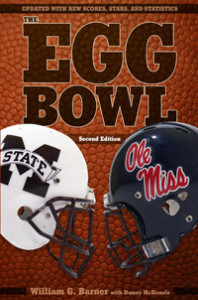 We are due for a stout Thanksgiving weekend of college football and for the first time in a long time as those outside of Mississippi will finally be paying attention to the Battle for the Golden Egg, a football game that has been played for well over a century.

This season is far from over, unless of course you’re a Gator fan.  Both Mississippi-based teams have major stumbling blocks ahead but the ones behind them have been cleared with flying colors.  And for that, their programs are to be commended and celebrated.

I’m pretty sure they’re already doing that right now in both Oxford and Starkville.

11 Replies to “The Mighty Mississipp”