If you had been paying close enough attention, you could have seen this coming a mile away.

ESPN is making its own news again.  This time around, they literally created a story out of the cool Los Angeles air.

As they have done over the past several years, ESPN released their official NBA player ranking leading into the 2014-15 season.  Personally, I always preferred the way Bill Simmons did it back in the day.  Simmons ranked players based on who you would not trade for another.  For example, if you ranked LeBron as the best player in the league and Durant as the second best, as any knowledgeable hoops junkie would, Simmons’ premise is that you would consider trading Durant for LeBron but never LeBron for Durant. 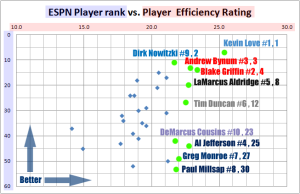 I’m not sure what criteria ESPN used for their rankings (I’m sure it involves some new-fangled, Bill Jamesian mathematics they love to justify but that has little actual bearing on the sport) but they’ve gone ahead and pissed off the Mamba in the process.  C’mon, ESPN.  Nobody likes a mad Mamba.  He’s cantankerous enough as it is.

ESPN and their alleged band of basketball experts ranked Kobe Bryant the 40th best player in the league.  They secretly had to know that doing so would elicit a reaction from the greatest two-guard of his generation.

When asked about his spot in the rankings, Kobe said that he’s “known for a long time that they [ESPN] were a bunch of idiots.”  Finally Kobe and I agree on something. 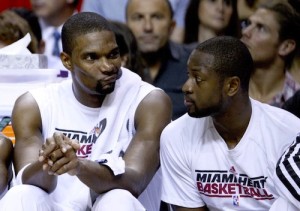 ESPN ranked Dwyane Wade 36th.  Wade could not be reached for comment.  They ranked Andre Drummond 30th.  Drummond shot 42% from the free throw line last year.  They ranked Serge Ibaka 25th.  Um.  And they ranked Chris Bosh 20th.  I guess they weren’t watching last year’s Finals all that closely.   We haven’t yet heard other players bitch about their rankings, probably because they don’t care as much about what others think about them as much as Mamba does.  He may tell us differently but he was obviously put off by this, otherwise he wouldn’t have called the network a bunch of idiots for their silly little poll.

Here’s how ESPN explains their rankings…

How did we rank the players? We asked our ESPN Forecast panel to rate each player on a 0-to-10 scale, in terms of “the overall level of play for each player for the upcoming NBA season.”  This includes both the quality and the quantity of his expected contributions, combined in one overall rating.

How’s that for scientific?

Their panel of experts includes writers, editors, former players, journalists, bloggers, commentators, etc.  Apparently none of them expect Kobe to play very much this season.  Or like him very much for that matter. 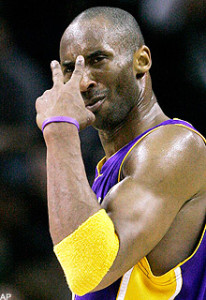 Here’s the funny part.  If Kobe averaged out at 40th, that means some people ranked him considerably lower than that.  Ouch!  Guess who’s just been taken off the Mamba family Christmas list.

Either way, this entire ordeal harkens back to the network being self-serving.  Do you see the irony here?  ESPN is creating news based on its own reporting.  Or weren’t we supposed to notice.  Literally nothing happened here yet it made headlines.  I’m on to you, ESPN.  Very clever.

In continuing their Kobe coverage, the latest news to make the network’s headlines is that Mr. Bryant is a bad teammate.  No shit, Sherlock.  Someone please give ESPN an Emmy for their investigative journalism.  We’ve known this for over a decade.

In its most recent issue, ESPN the Magazine, a rag to which nobody subscribes, released an article simply entitled “Kobe.”  In his article, Henry Abbott cites unnamed sources who claim Kobe is a bad teammate and the reason for the Lakers demise.  Like I said, it must be pick on Kobe week.

Look, I don’t need ESPN to tell me Kobe’s a dick.  I’ve known that for years.  But piling on the guy as he rides off into the sunset is a tad excessive even for Kobe.

We know he took too much money in his last contract but the Lakers were the ones offering it.  We know he’s egomaniacal but do we really need to hear guys like Skip Bayless say that Kobe Bryant’s rape allegations helped him sell sneakers?  As Coach Reese would say, this is just another reason to watch sports with the volume off.

Congratulations, ESPN.  You managed to do the impossible.  You made us feel bad for Kobe Bryant.