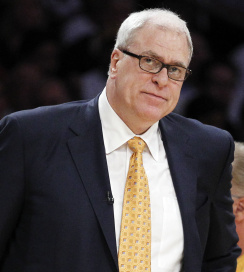 FILE – In this June 6, 2010 file photo, Los Angeles Lakers coach Phil Jackson watches during the first half of Game 2 of the NBA basketball finals against the Boston Celtics, in Los Angeles. Carmelo Anthony says he has heard that 11-time NBA champion coach Phil Jackson will be “coming on board” in a leadership capacity with the New York Knicks, though cautioned that nothing is yet official. Anthony made the comments Wednesday, March 12, 2014, to reporters in Boston, where the Knicks are playing the Celtics. (AP Photo/Chris Carlson, FILE)