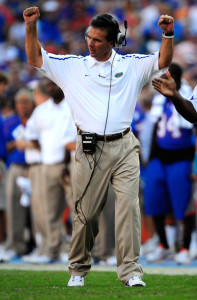 Urban Meyer is their head coach.

Urban Meyer used to coach the University of Florida, my alma mater, where he won two more national championships.  That wasn’t all that long ago.

Interestingly enough, these two premier programs had never played each other in a football contest prior to 2006.  They now share a brief yet rivalrous history, with Florida besting Ohio State in both football and basketball national championships a few years ago and Ohio State ultimately sneaking off with Florida’s head coach.

All of Gator Nation was concerned.  After all, he had just won two titles, doubling the feat of the beloved Heisman Trophy winner and Ol’ Ball Coach who came before him.

After a brief break, an analytical stint at ESPN, Meyer decided he wanted to coach again leaving Gator Nation betrayed and bewildered, angered and inconsolable.  For we knew it was only a matter of time before he did what he did with us with another.

We knew when he put his resume out there he could have his choice of any job out there.

He landed in Columbus. 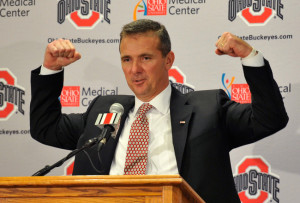 Various texts hit my phone prior to the championship game, friends asking me who I thought would win the big game.  Obviously they weren’t paying attention to how I fared picking football games this year.

I told them I thought the Ducks had the talent to win that game, that they were due, but that Urban Meyer scared me.

You can’t, can you.  So how’s a guy two years on the job going to take down one of the best coaches in the modern game?

You can have every Heisman Trophy winner and Nike sponsor from here to Eugene and it won’t help matters.

So as a congratulatory, respectful yet clearly embittered Gator football fan, I ask, how did this all happen?  Championship head coaches the caliber of Urban Meyer come around very rarely.  So how did the University of Florida let him slip away?

How did we not kowtow to his every demand?  Don’t tell me it wouldn’t have been worth it.  Columbus, Ohio begs to differ. 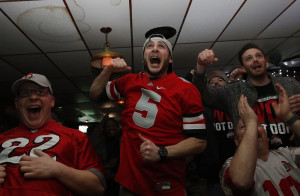 Buckeye Nation knew what they were getting when they landed him but even they were shocked this all happened so suddenly.  They weren’t even supposed to be in this thing.  Not so soon anyway.  They’re still pinching themselves.  But that’s how Urban Meyer rolls.

And then there’s Jeremy Foley, the University of Florida’s athletic director.  I’m sure a congratulatory call was made, the two most likely maintaining a cordial relationship.  But ultimately, Foley’s the one with the egg on his face, the one that got away forever a stain on his resume.  And while Florida starts anew with the Muschamp experiment in the rear view mirror, Ohio State celebrates. They will continue to as Meyer has created another football behemoth.

Nick Saban, the only other head coach to win national championships with two different schools, is now firmly entrenched in Alabama, his LSU days gone but not forgotten.  Urban Meyer now resides comfortably in his home state, polishing more hardware for his trophy case.  His national championships in Florida are not forgotten but like the Muschamp days, they’re also in the rear view mirror.  He may soon become the only coach to win multiple titles with multiple schools.  And Columbus will once again celebrate, Gainesville, Florida not so much.

While the future is bright for both programs, one of them has the better head coach.  Somehow that happened.  We’re just not sure how to explain it.

16 Replies to “The one that got away: Former Florida coach brings national championship to Ohio State”