Oh goodness, I haven’t ragged on anybody in a while.  I mean I’m generally a nice guy.  Just ask anyone who knows me.  But there comes a time and a place where sports snobbery must rear its ugly head.  Blatant sports sins simply cannot go unpunished.

Let’s just say I was at a certain sports bar watching a certain football game recently.  Let’s also say there were, as one would think, a number of people interested in this particular game.  Furthermore, let’s just say there was a person at said bar who wasn’t exactly knowledgeable in all things football, which is perfectly fine, except for that fact that he overtly professed to be.

At that point, all bets are off, as you will soon see.

Trust me when I tell you I wasn’t the only one in the bar correcting what soon became the most annoyingly, clueless gentleman you’d ever have the displeasure of meeting.

Please allow me to share with you the painful moments that can occur at a sports bar when you’re unlucky enough to sit next to the wrong person.

There were two points during the game in question – and his corresponding comments – that nearly made my ears bleed.  The plays which prompted these comments were otherwise forgettable.  They were standard, run-of-the-mill football plays that became extraordinary when our antagonist blurted out statements that would make even the average sports fan cringe.

Play one: One of the players from one of the teams was in possession of the football; which player and which team are unimportant.  During the play in question, at first glance, the player had coughed up the football.  The ruling on the field was a fumble.  The only problem was the player’s knee was down.  Television replay immediately showed evidence that the call would be overturned.

Now, the rule in both college and professional football, and pretty much all football in general, is that the ground cannot cause a fumble.  So if the player in possession of the football has his knee down on the turf and afterwards the ball is stripped, the player is considered down.  No change in possession. 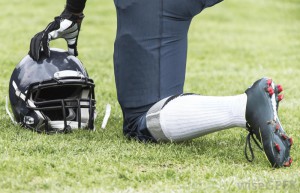 As has become customary in both college and pro ball, the officials went to the booth to confirm that the ball had not been fumbled.  Again, multiple video replays showed the player was down.

That’s when our sports fan went off.  “Fumble!  Fumble!” he shouted.  “That’s clearly a fumble!”

The gentlemen who happened to be sitting next to him explained, as I just did above, that the runner was already down when the ball came loose.  Our sports fan then proceeded with an “Oh, that’s in college when it’s a fumble” line, as if further ignorance on his part would get us to agree with him.

Somebody shoot me.  Or better yet, him.

The call was overturned, the team regained possession and our antagonist continued to rant intolerably.

The game continued as did his priceless words of wisdom.

Play Two: One of the teams was driving with a player scoring a touchdown… or so it seemed.  The team was inches from the goal line with the player carrying the football, about to cross it… but he didn’t.

Once again, similar to the play we just discussed, his knee was down before the ball crossed the goal line or to use the proper vernacular “broke the plane.” 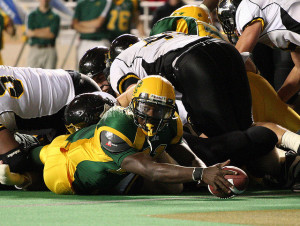 I don’t know how much this gentleman had to drink but I do know he didn’t know much about football.  That much was obvious.  I chose to leave this one alone.  Knowing that I’d be able to vent about him later on a website near you was ample substitute.

The gentlemen next to him, slowly beginning to lose their patience but still having fun with his toolishness, explained that the ball needed to cross the plane before the runner was ruled down, which has been pretty standard procedure ever since the game was invented.

“What a stupid rule,” our antagonist argued.  I swear this actually happened.

So, by this poor sap’s logic, a ball doesn’t need to actually swoosh through the rim to count as a basket?  Nah, don’t worry about it.  That shot was close enough.  Or how about a home run reaching the warning track but landing feet short and comfortably in an outfielder’s mitt?  It’s okay, ump, wave him home, that ball was almost out of the park.

To be clear, the football must cross the goal line for it to count as a touchdown, in college, pro ball, high school, Pop Warner and basically every league except for the one this buffoon watches.

After a few more pops, I went on to overhear this gentleman mention that his girlfriend chose not to watch the football games with him.  The more shocking anecdote was that he even had a girlfriend in the first place. 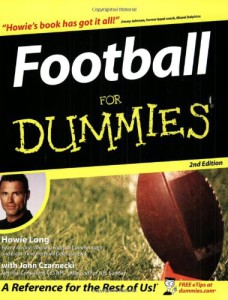 Hey, I’m only here to help.  I’m sure there are books like “Football for Dummies” that you can pick up at your local Barnes and Noble.

But from now on, here’s what I’m gonna do.

The next time I hear a poor sap in need of sports schooling, I promise to ask him for his email address and subscribe him to this website myself.  You know, like those guys in the plumbing commercials who magically appear at someone’s doorstep as soon as their pipes burst.

If it makes this world a safer place so that we don’t have to listen to blowhards like this any longer, those who think they know what they’re talking about but sadly do not, I’d consider it my duty.  Remember, gents.  Admitting you don’t know is half the battle.

For previous episodes of Sports Snobbery, turn here and here