A friend of mine who is a non-sports fan (yes, I do have some of those) made an interesting observation the other day as scrolling headlines on the TV above us continued to report news of the NFL’s latest black eye.  My friend mentioned in passing, rather poetically “As their empire lay crumbling, all anyone could do was talk about balls.” 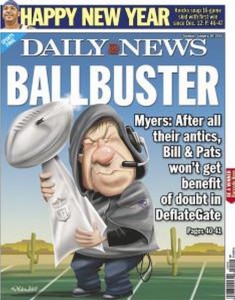 And he was right.

News of Deflate-gate has dominated the headlines for over a week.  It was all any talking head on any television station could talk about.  Who ordered the deflating?  Did Tom Brady do it?  Was it Bill Belichick?  Who un-aired these godforsaken footballs that gave the New England Patriots such an unfair advantage over those poor Indianapolis Colts and how long had they been doing it?

The Patriots rarely fumble, studies showed.  That must be the result of them tampering with the equipment, making the ball less fumble-able.

In his press conference immediately following news of Deflate-gate, Tom Brady downplayed the importance of the NFL’s latest mishandled scandal by saying “It’s not Isis.  No one’s dying.”  While tremendously inappropriate and voraciously insensitive, the gist of Brady’s comments was correct.  We have now spent over a week obsessing about the pounds per square inch of an oblong leather object.

Everything else, including the game itself, has become of secondary importance.

My friend J-Dub hosts a series of posts he calls Signs We Are Near the End of Civilization.  I would hereby like to enter deflated footballs into that discussion.

While I agree that rules regarding fair play should exist in professional sports, politics, business, etc., and violators of said rules should be penalized accordingly, such punishment should be carried out swiftly and consistently.

You’d be hard-pressed to find anyone who doesn’t think Brady and Belichick aren’t guilty of inappropriately tampering with their balls.  Even ESPN jumped on the bandwagon.  Quarterback-turned-analyst Mark Brunell was moved to tears in his disbelief of Brady’s alleged twisting of the truth. 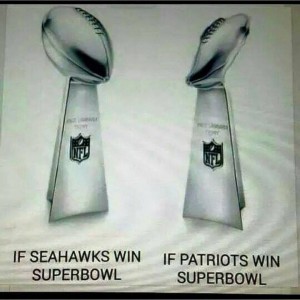 This week, without any solid evidence (it has now been ten days since said balls were deflated), Patriots owner Bob Kraft has demanded the league issue his organization a formal apology when no proof can be found.  Ironically, the entire incident has become an inflammatory and defamatory war of words.

Now the league allegedly has video evidence of someone deflating footballs.  (I can’t believe I’m still talking about this).  You can just smell TMZ working overtime.  Why has this video not been released?  Why has this person not been interviewed?  Was he employed by the Patriots?  And is this really the kind of discussion the NFL wants to have days before its biggest event?

Either way, most of us have made our minds up and probably spent too much time doing so.  I’m not here to tell you who to believe or why.  It really matters not.

The fact that each team is responsible for submitting a dozen or so balls to referees before each game is a ridiculous rule to begin with and one that will likely change before the very next football game is played.

In a matter of days, we’ll have another Super Bowl with little talk about football, only footballs.  If the Patriots cheated, then penalize them accordingly.  If they didn’t, leave them alone.  Either way, get to the bottom of it so we can all move on with our lives.

If there are systems in place that allow teams an unfair advantage, remove those systems so we can talk about the game without speculation or prejudice.  After all, the Super Bowl is the greatest sporting event in the world.

Let’s keep it that way.

13 Replies to “What’s all this talk about balls?”