I wrote not long ago that Marshawn Lynch is my favorite NFL player.  Why?  Because he’s all about that business.  Lynch will now go down as the guy that should have been but was not handed the ball at the end of Super Bowl XLIX.  But that’s a story for another time and the reason Pete Carroll will have many sleepless nights in his immediate future. 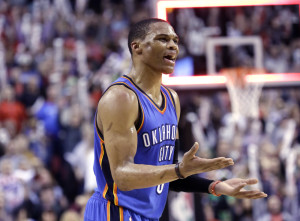 I also have a new favorite basketball player.  His name is Russell Westbrook.  Perhaps you’ve heard of him.  All he’s done lately is tally four consecutive triple-doubles… with a hole in his face.  That’s right.  Not his nose, not his mouth, not his ears.  A clearly visible dent in his face.

About a week ago or so, Westbrook was down on the floor as players who hustle are prone to do.  He was about to get up when teammate Andre Roberson’s knee inadvertently ran into Westbrook’s cheek.  You could see a part of Westbrook’s face caved in.

You know what Westbrook did?  He kept playing.

Let me repeat that in case your ADD just got the best of you.  Russell Westbrook was forcefully kneed in the face by a teammate, resulting in a golf ball-sized gap in the side of his head… and he kept playing.  Not only that, he logged a triple double, scoring 40 points, 23 rebounds and 11 assists.

Again, just wheeled out of the damn hospital, Westbrook scored 49.  Now I know it’s Philadelphia and the doctor who operated on him probably could have scored a dozen that night but 49 fresh out of the emergency room?  Color me impressed!

That came back in early February on an ordinary evening against the Orlando Magic.  Westbrook and company were headed to the bench where Jeremy Lamb and others waited to greet them for a job well done.  Lamb was high-fiving players as they approached the bench then for some inexplicable reason failed to recognize Westbrook.

Westbrook stopped in his tracks and gave Lamb a stare that guaranteed he would never make that same mistake twice.  I’m surprised Lamb wasn’t traded on the spot.

Yea, that’s Russell Westbrook, my new favorite player.  He’s explosive, dynamic, determined and flat out frightening.  Not to mention he just earned MVP honors in this year’s All-Star Game by dropping 41 points, a number behind only to Wilt Chamberlain and Michael Jordan.

Nobody in their right mind expects Westbrook to continue this streak, not that it would surprise us. Either way, it’ll be fun as hell to watch… unless, of course, you’re having to cover him.

15 Replies to “And my new favorite basketball player is…”