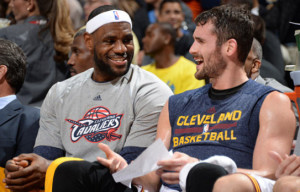 In a recent radio interview with Dan Patrick, Cleveland Cavalier Kevin Love said that Russell Westbrook is more deserving of this year’s MVP Award than Love’s own teammate LeBron James.  In their never-ending quest to make something out of nothing, ESPN ran this “news” across its ticker in the hopes that somebody would make a big deal out of it.

Fortunately nobody did.  Ya’ know why?  Because Kevin Love spoke the truth.  Westbrook is more deserving of this year’s MVP.  So are James Harden and Stephen Curry, one of whom will likely receive the award.

Kevin Love was not asked who he was thought the best player in the league.  That question is far more cut and dry.  Love was also not asked who he’d rather have as a teammate or which player he thought gave him a better chance at winning a championship.  Those answers are pretty straightforward as well. 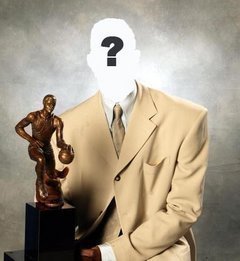 This year, much more so than in recent years, we’re finally looking at the NBA MVP award in a different light, or at least I am.  Not only in the NBA but in the other major sports leagues as well, debate has seasonally raged over whether the award should go to the league’s best player or the player that is most valuable to his team as the award suggests.  What does the award actually mean, who should win it and is it given to the right person every year?

This year, if polled, probably about 85% of the MVP voters would tell you either Curry or Harden will be getting their vote over both Westbrook and Bron Bron.  I don’t think anyone has a problem with that.

One could conceivably make a case for Bron Bron winning the award.  After all, his team took a nosedive when he was injured earlier in the season.  They have a stronghold on second place in the Conference since his return.  Despite the seasons the other three are having, one would have to be delirious to not think he’s still the best player in the league.  But more often than not the MVP award goes to a player that puts up video game-like numbers and Curry and Harden are doing exactly that.  Westbrook has also been doing that in spades but his team is struggling to make the playoffs.  Meanwhile, LeBron suffers from MJ Syndrome.  Sure he’s averaging 26-7-6 but he does that every year.  We’ve come to expect it.  I’m not suggesting that Harden and Curry aren’t more worthy.  I’m just saying that LeBron’s career numbers work to his detriment.  The fact that he’s shooting 49% from the floor this year while managing 57% last year certainly doesn’t work in his favor. 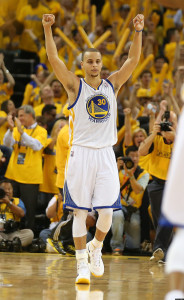 James Harden is carrying the Rockets in the absence of Dwight Howard who has missed over half the season.  He’s averaging career highs in points assists and rebounds.  Westbrook has been spawning triple-doubles while his teammate Kevin Durant has been injured.  And Steph Curry is putting up the best offensive numbers on the best offensive team in the league.

Fortunately, the Chosen One came out and said he didn’t have a problem with Love’s comments.  After all, those guys are having better seasons.  It would be silly of LeBron to think otherwise. Besides, LeBron knows who would win a game of one-on-one if they all played.  If this serves to inspire LeBron in the post-season, we all might want to look out.  There’s nothing we’d like to see more than LeBron face off against one of these three in the Finals.

Here are your four primary candidates for MVP this season.  Who’s got your vote?

Curry’s probably going to win the award in a highly contested battle with Harden coming in second and LeBron and Westbrook competing for third and fourth places.  At least that’s my opinion.  And if that’s the case, the award will have gone to its rightful owner.

If nothing else, at least this year’s debate has given us a little clarity into the real meaning of the award.

7 Replies to “Clarifying the MVP debate”