Can you imagine having Magic Johnson at your disposal, the luxury of being able to pick up the phone and ask “Hey, Magic!  Do you mind coming down to campus and giving the team a quick pep talk?”

Think about it.  Office woes got you down?  Is productivity not where it should be?  Or perhaps you have problems on the home front.  Just give Earvin a ring to make things all better.  That’s Earvin Johnson, motivational speaker. 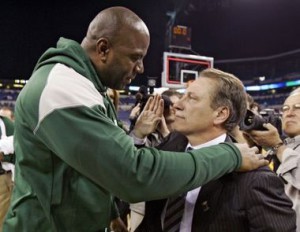 Fortunately for Tom Izzo and the Michigan State program, Mr. Johnson is at their beck and call.  And it seems to work, for once again, the Spartans are in the Final Four, their seventh in the last seventeen years!

This year might be the least expected of the lot.  They were a seven seed!  I hereby declare making a Tom Izzo-coached team anything lower than a four seed absurd, inappropriate and wholly disrespectful.  I don’t care what kind of year they’ve had.  Izzo in the Final Four has become as automatic as my bracket being busted for not picking his teams to go that far.  One of these days I’ll learn my lesson.

But back to Magic.  You don’t see Michael Jordan giving pep talks in the UNC locker room.  Ya’ know why?  Because Michael Jordan is a dick who could care less about what some random teenagers are doing if they’re not buying his shoes.  Magic, on the other hand, is cut from an entirely different cloth.

The guy is a ball of never-ending positive energy.  Make no mistake.  He’s as cutthroat and as competitive as Michael.  He’s just far more socially acceptable in his demeanor. 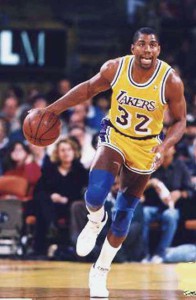 Magic also had a cutthroat rival in Larry Bird he always had to contend with.  Michael had no such rival.  In fact, had it not been for Bird and a fluke turnaround jump shot by Ralph Sampson, Magic may very well have had more titles than Michael.

Regardless of where you stand on that debate, one thing is for certain: Magic is the better leader.  Just watch Magic when he’s talking to those wide-eyed kids in the Michigan State locker room.  The guy is a born leader.  He’s inspirational and he damn well knows his hoops.  Say what you will about his hot tubbin’, womanizing days back in L.A.  Finding an athlete that’s loyal to his wife is as rare as finding Michigan State outside the Final Four.

I’m not here to convince you that Magic Johnson was better than Michael Jordan.  That argument is entirely subjective.  I am here to tell you that Michigan State has reached another Final Four and that is partially because of the university’s most famous graduate.

And that, my friends, is pure magic.