A not-so-great man once gave me the best advice of my life. He told me, “the number one killer of old people is retirement.” His point at the time was simple. If you want to be the best at something….you have to beat the best. That’s not just a Ric Flair tagline, it’s true. Okay, his bigger point was that you have to have a goal or you die….but that’s for another article. 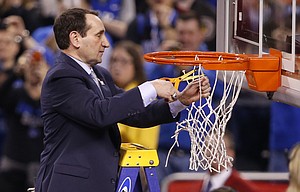 So, we now turn this theory to Duke fans. Duke has now won five titles, been in sixteen Final Fours, and has won more conference championships than I’ve had girls (caution: low bar to clear). But to have a story like Kentucky, where they’ve run rampant over the entire country, only to stumble short of being the villain in the movie’s climax. Even if you win the title after that….isn’t it tainted?

So, with Kentucky out of the way, and pickpocketing Wisconsin en route to the title….which R are Duke fans filled with? Relief, that they didn’t have to contend with the juggernaut? Or regret, that they weren’t the ones to knock them off their perch in the finale?

Picture the year the Patriots finished the regular season unbeaten. Would it have made as good a story if they had lost in the AFC Championship? Of course not. The beauty of the story was the Giants taking them down at the last minute.

So what other monster teams have tripped up before the final, depriving us all of a proper upset to end the season?

The Bruins of 71, led by Bobby Orr, blew everyone away. They not only led the league in scoring, they scored more than 100 more than the second-highest scoring team. But then they tripped up in the first round of the playoffs, and Montreal went on to take home the Stanley Cup.

28 points given up over nine games. 11 Pro Bowlers. Back-to-back Super Bowl winners. Possibly the best defense in NFL History, depending on who you want to believe. Then they got their asses kicked by Oakland in the AFC Championship.

Insert your favorite joke about Catholic hubris here. After taking down the undefeated Seminoles and paving their way to the National Championship against Nebraska, Notre Dame’s Fighting Rudys got gobsmacked by Boston College. At least they had the temerity to lose in time for 10 year old Doctor Milhouse to watch WWF’s Wrestling Challenge that night.

The USA Men’s basketball team in the Athens Olympics. Good lord. A disaster area that jobbed out like Barry Horowitz to Argentina in the semi-finals.

The Germany World Cup in 2006 was supposed to be Brazil’s farewell party. Ronaldo was destined to lead his friends to back-to-back World Cups and retire in grace. Instead, they lost out to France in the semi-finals, and now Ronaldo is known only for his penchant for transsexual prostitutes.

Leave some of your favorite teams to never make the finals in the comments.

3 Replies to “Cmon Duke Fans, Which R are you filled with?”