Jordan Spieth won the 2015 Masters tournament with a dominant performance from start to finish at Augusta to win his first major at just 21 years old. The American, who finished joint-second on his debut in the prestigious event last year, held off competition from Justin Rose and three-time winner Phil Mickelson to earn the green jacket. We take a look at Spieth’s performance throughout the entire week, and then focus on Justin Rose and world number one Rory McIlroy’s tournaments too.

He led from the very start

Spieth led from the front after an excellent opening round of 64, equivalent to 8-under par. He then hit a 66 in the second round to record the lowest 36-hole total in Masters history to move to 14-under par and take a five shot lead into the weekend. The youngster then recorded the lowest 54-hole total in history as he moved to 16-under par before finishing on 18-under par and equalling Tiger Wood’s record. His performance will always be remembered as one of the most dominant performances in Masters history as he became just the fifth man to lead wire-to-wire. 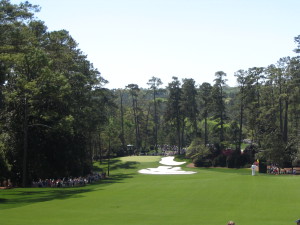 Most birdies in Masters history

Spieth broke many records during his outstanding week at Augusta, but perhaps the most impressive was the number of birdies he hit. The 21-year-old hit an epic 28 birdies, passing Phil Mickelson’s previous record of 25 to become the record holder. Nobody came close to the American, who is a truly deserving winner this week and is already looking forward to a rivalry between himself and McIlroy in the future after the result meant that Spieth cemented his place as the world number two.

Justin Rose and Rory McIlroy made their move too late

Many expected that the world number one would win this year’s event, and this would mean that the Northern Irishman would become just the sixth man to win the Grand Slam of all four of golf’s majors. However, it wasn’t to be as McIlroy had a poor first 24 holes and Spieth was too far in front. Despite this, the world number one recovered well and recorded 15-under par in the last 45 holes.

Meanwhile, Justin Rose had an excellent tournament and will feel aggrieved at missing out on the victory, despite posting 14-under par for the event. Rose posted five birdies in a row in the third round to put the pressure on Spieth, but he was too far behind after the opening two rounds. The Englishman’s total would have been good enough to win 13 of the last 14 Masters events, but Spieth was just too good this week and the American fully deserved the victory.

4 Replies to “The Masters: A Review”