“I see your true colors shining through.” 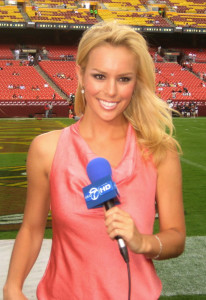 Britt McHenry is in the news for a change and not reporting it.

Who is Britt McHenry, you ask?  Don’t feel bad.  I had never heard of her either and I watch a lot of ESPN.  Either way, we sure as heck fire know who she is now.

Apparently last week, the effervescent and awfully full-of-herself ESPN reporter parked her car in an illegal parking space, where it was towed forcing her to go to a tow lot to pick it up.  Anyone who’s ever dealt with towing companies knows negotiating a car’s free release is an exercise in futility.  It’s also the most unpleasant experience this side of getting a speeding ticket or listening to a Kobe Bryant interview.

Most of us who have had to retrieve our car from a tow lot have hurled a few healthy expletives but a) it wasn’t caught on camera for millions to see and b) we don’t work for ESPN/ABC/Disney.

The same cannot be said for Britt McHenry who, upon retrieving her car, gave the towing employee a piece of her mind.  McHenry’s tongue-lashing made Richie Incognito look like a motivational speaker.  Seen here on a hidden cam (the tow lot attendant is not), McHenry belittles the person handling the release of her wheels.

A raggedy-headed and clearly miffed McHenry reminds you of that spoon-fed sorority girl who wouldn’t give you time of day once she saw the kind of car you drove.  In turn, Tweeters around the globe gave McHenry a piece of their own mind.

You mean hot famous people are sometimes mean to people who serve them? Get the hell out of here. #BrittMcHenry

You should have seen Britt McHenry’s reaction in the 90s when they towed the wet sprocket.

Some advice for Britt McHenry. Don’t use those perfect teeth when you’re blowing a guy for your next job!

Has the Skinny Young Blonde Society of America rushed to the defense of Britt McHenry yet?

Tim Duncan was winning titles when Blake Griffin was still getting bullied by Britt McHenry in elementary school for being a ginger.

“Wait, Britt McHenry has a journalism degree? Yep, that is why we hired her. Let’s go with that” – Multiple ESPN Execs. #BrittMcHenry

Part of me feels bad for @BrittMcHenry. Poor thing actually believes she was hired for her “brains” and “education”. #firebrittmchenry

Things @BrittMcHenry didn’t learn in college: 1. How to read a tow zone sign. 2. How to be a decent human being. #firebrittmchenry

If you ever get to the place where you feel really good about yourself, I suggest not towing Britt McHenry’s car.

Britt McHenry is just lucky this wasn’t the parking-lot attendant she ticked off this week: #bettercallsaul

After reviewing the tape of Britt McHenry, ESPN has decided to give a two-week suspension to Bill Simmons.

Even though Britt McHenry is a worthless human, I would have liked to hear her response had Brett Favre texted her instead of Jenn Sterger.

My thoughts on this whole Britt MCHenry story: Why couldn’t it have been Skip Bayliss?