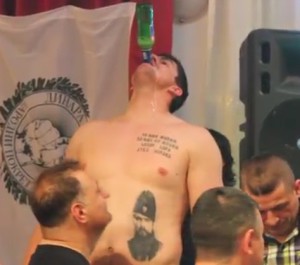 You see some disturbing things while surfing the internet but this week, disturbing just kicked it up a notch.

I don’t know whether draft busts Sam Bowie or Ryan Leaf have ever sunk so low as to make their stomach tattoos drink beer directly from the bottle but a number two overall pick equally as infamous did just that and is now an image forever burned into my head.

With the NFL Draft a day away, I’d like to know if Joe Dumars has seen the video of a shirtless Darko Milicic, a former top draft pick of his, chugging beer from a bottle then feeding some to his stomach tattoos… as if Joe D doesn’t already have sleepless nights regretting that horrible, horrible decision.

You can talk about draft busts Sam Bowie and Ryan Leaf all you want.  At least the Portland Blazers and San Diego Chargers have recovered from those ill-fated, draft day blunders.  The Pistons haven’t sniffed relevance ever since Joe Dumars took Milicic over, get this, Dwyane Wade, Carmelo Anthony and Chris Bosh.

Did Joe think Darko was the next Dirko?  I know European players were becoming all the rage but didn’t he sit down with the guy and have a heart to heart?  Couldn’t he look into his crystal ball and foresee the man, one day down the road, feeding his stomach tattoos suds while jamming topless to the Serbian sitar strumming in the background?

That’s the thing about draft picks.  You never know.  Who knows if the Buccaneers top pick this year will end up living in a shopping cart, turning tricks and sipping on cough medicine while selling black market seal pelts to high school kids?  I shudder at the thought.  Not of the poor baby seals but of the Buccaneers being bad for another ten years thanks to a Dumars-like decision. 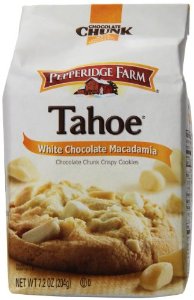 So what’s up with these Pepperidge Farm cookies?  I just found some at my local super market that were buy one get one.  Obviously, I couldn’t resist.

They only come eight to a package and cost about four dollars.  It’s not that I’m opposed to paying fifty cents for a cookie.  They’re damn good cookies.  But Pepperidge Farm has to know that package is going down in one sitting.  I mean, who has the will power to not eat an entire package of those white chocolate macadamia deals in one fell swoop?  They’re delicious.  That whole serving size information on the side of the bag is just a guideline, right?  Like a speed limit.  We don’t actually drive the speed limit.  We drive a few miles over it.  So don’t try to tell me the serving size is one unless you mean one package.

Has anyone in the history of mankind not finished one of these bags right after opening them?  Even if they’re stale (and they only get stale because we forget we have them in our cupboard), we still finish them, rustling whatever crumbs lay at the bottom of the bag, disappointed that a cracked cookie might mean Pepperidge Farm gypped us.  Those bastards!

What’s even more amazing is how they pack all that guilt into the bag at no extra charge. 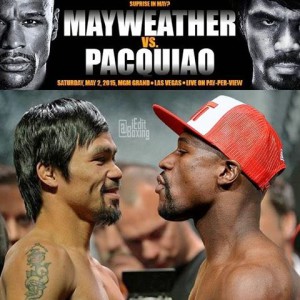 Bout, bout, let it all out

Speaking of finishing things quickly (insert sexual reference here), the Pacquaio-Mayweather boxing match sold out in a record sixty seconds.  If that doesn’t exemplify America’s unquenched thirst for the sweet science, I don’t know what does.

Here’s what I understand least about the gradual devolution of boxing.  It’s not that corruption runs rampant through the sport.  Greased palms exist in all organized sports.  Just look at the NCAA, the International Olympic Committee, FIFA World Cup Soccer, Major League Baseball during the steroid era, mixed martial arts and the NFL and its concussion crisis.

Nor does it faze me that tickets for Pacquiao-Mayweather are going for over $100,000.  What confounds me most is that with all this desire, with people wanting to see quality fights so bad, with our continued reverence for champions of the past, with all this demand, professional boxing and those who run it have STILL found a way to run the sport into the ground.

It’d be like a bunch of thirsty, starving people walking into my bar with good money to spend and me refusing to serve them despite our kitchen’s incredible delicacies and the tons of liquor that lie behind me.

It makes absolutely no sense and it’s a crying shame, the fact that Congress wants to step in and intervene in every sport EXCEPT boxing.

Enjoy Pacquaio-Mayweather, friends.  America will stop what they’re doing on Saturday night to watch the last great fight any of us will ever see.  It’s bound to shatter all viewing records.  And it should, even though both these boxers are well past their prime.

It’s been almost twenty years since we’ve seen a fight this big.  It’ll be even longer until we see the next one.

13 Replies to “Chumpservations, Vol. 34: Draft picks, cookie monsters and the last great boxing match any of us will ever see”