Buccaneers fans have waited months for an answer.  Their clock started ticking the moment they lost last season’s final game.  It was one of fourteen losses they suffered in 2014, just another year at the office for Tampa faithful. 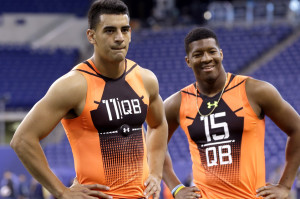 Having sealed the league’s worst record, the Bucs were awarded the draft’s top pick.  The potential, or at least immediate, fate of their franchise rested on a single decision.  Winston.  Mariota.  Mariota.  Winston.  Finkel.  Einhorn.  Which quarterback would the Bucs take with their first selection and how would it all pan out?

Despite having the luxury of the top pick, the Bucs landed this ignominious honor in a year with no clear cut number one.  Both quarterbacks had upside, both carried question marks.

If the Bucs could have turned back time and traded this pick for the top pick back in 2012, they’d have done so in a heartbeat.  But there is no Andrew Luck this year, or at least we don’t think there is.  A decision on one of the two had to be made.  An entire city hoped it would be the correct one.

The number one pick has carried promise in the past but this is what Buccaneers fans are afraid of.

The Oakland Raiders took JaMarcus Russell with their number one pick back in 2007.  He’s fat now.  Wait, he was fat THEN so allow me to correct myself.  He’s really fat now and still living off the millions Oakland paid him.  To aptly demonstrate just how wrong we can be about this sort of thing, draft guru Mel Kiper, Jr. called Russell “John Elway-like.”  The only thing Russell has in common with Elway these days is that neither is playing in the league.

The selection of Russell at number one set the Raiders back years.  Eight seasons later, they are still irrelevant.

Jameis Winston is not JaMarcus Russell… or at least we hope he’s not.

While not a peep emerged from One Buc Place all winter about which quarterback they favored, most assumed Winston was the odds-on favorite.  His off-the-field actions which involve rape allegations and crab leg stealing, as well as his interception-prone decision-making on the field, left the door open for the squeaky clean Mariota as Plan B. 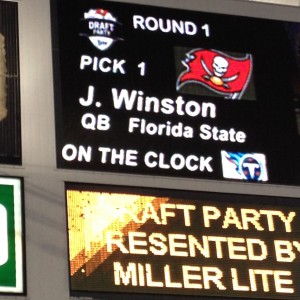 We may never know for sure the extent to which Tampa Bay was entertaining offers for the top pick.  Either way, Famous Jameis is their man and now holds the future of this franchise in his work ethic.

The Buccaneers held a draft party in Raymond James Stadium Thursday evening.  Attendance was expected to reach around 15,000 but they were lucky to land half that many, still a healthy turnout for a team that can barely sell out home games.

The NFL Network’s draft coverage was piped through the stadium on the big screens in each end zone.

Before the Bucs made drafting Jameis official, analysts on the set announced that Philadelphia was willing to trade two first-rounders, a second round pick, an established defensive star in Fletcher Cox, Sigourney Weaver, the cast of “Rent” and a few other players for the opportunity to move up.   Rich Eisen called it a “king’s ransom.”  San Diego was also reportedly dangling the disgruntled Philip Rivers as trade bait.

All offers were refused.  Minutes into the draft, Winston was a Buccaneer.

According to reports, the franchise conducted an “unprecedented investigation” delving into Winston’s character.  They obviously approved of the answers they received but that didn’t stop half the crowd from moaning once the selection was announced. 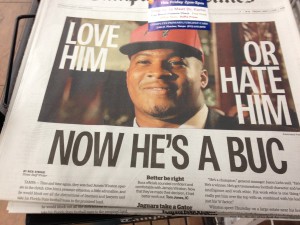 Tampa is now a city divided.  One Half of the town is skeptical, wishing they had considered other options, as if the team didn’t do their due diligence.  The other half thinks Jameis is the kind of quarterback a team can build around.  The only thing for certain is that there is no middle ground.  He is the most polarizing and certainly scrutinized player to hit the NFL since, well, Johnny Manziel, minus the Bieber cameos and binge-drinking but with the rampant immaturity.

The most interesting thing about Winston’s future, which he shares with basically every human being on this planet, is that nobody knows what it holds.  Ultimately, half of us will be proven right but which half is anyone’s guess.

I went to the University of Florida.  I’m also a Buccaneers fan.  I’m not rooting for Winston to fail just because he went to a rival school.  That’s ludicrous.  What’s the point of wishing ill will upon the man?  To be able to say I told you so if he fails?  What good does that serve?

It’s time to for Buc Nation to put aside our differences and give the kid a chance.  The pressure upon him is already immense enough, that last thing this kid needs is a lack of support.  He’s going to make mistakes.  He’s 21 years old.  If you disapprove of Winston because of his past, then so be it but as of now, he starts with a clean slate and an NFL record of 0-0.

The Buccaneers got their man and his name is Jameis Winston.

Most draft experts gave the Buccaneers a B but like us, they can’t see the future either.  No crystal ball can tell us whether Jameis will deliver the Super Bowl he promised.  At this point, we’d be happy with a winning season.

It’s a shame that some of us will be happier with an “I told you so.”