This just in!  Soccer’s corrupt.

Wait, you already knew that.  That’d be like telling you the sky is blue or Adrian Peterson has poor parenting skills.

In news that came as a shock to no one, FIFA’s Sepp Blatter resigned only five days after being elected to his fifth presidential term.  So much for term limits.

Apparently the heat on Blatter was just too much… and he hadn’t even made it to Qatar yet.  Rim shot please.

Who knows what he took and when but let’s just say the guy doesn’t have much of a fan club.  Twitter rejoiced at the announcement of his resignation.

Here are some of the more celebratory and downright hysterical Tweets that hit the airwaves the day international soccer was (hopefully) changed forever. 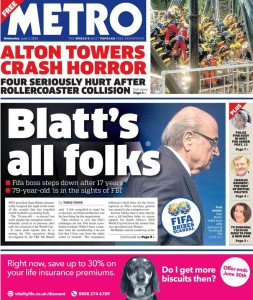 #Blatter: “I’m 79. It just struck me that I ought to be spending more time with my lawyers. Did I say lawyers? I meant grandchildren.”

America has finally managed to successfully remove a dictator without starting a war, or killing any innocent children. Progress! #Blatter

It’s time for Sepp Blatter to take over the NFL and clean that trash heap up. 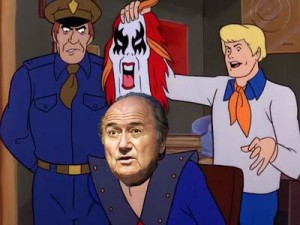 Sepp Blatter looks like one of those college coaches running before the NCAA gets them. Only, in this case, the authorities will follow.

Sepp Blatter is also the worst Bond villain name ever.

If this were 2011, I’d tweet Sepp Blatter’s recent presidency was shorter than a Kardashian marriage. 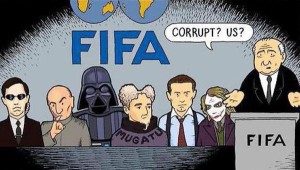 Sepp Blatter has announced that the next World Cup will be held in federal prison.

Sepp Blatter is retiring to spend more time with his money.

Sepp Blatter was re-elected and resigned since the Cavs last played.

I would have liked it if Sepp Blatter had ended his news conference with: “Stay thirsty, my friends.”

All five Soccer/football fans I know should be ecstatic